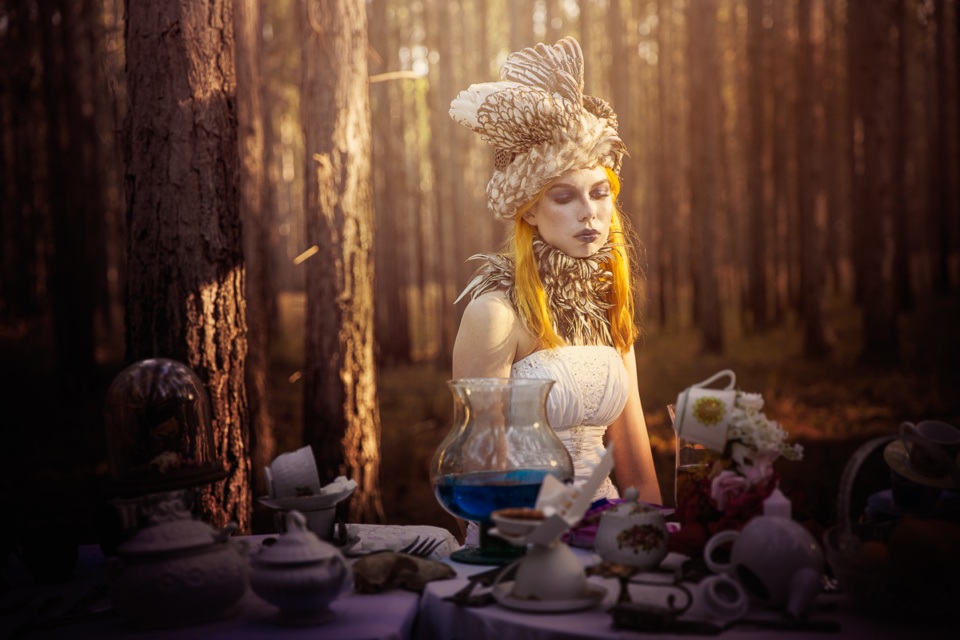 A few months ago I saw a call out on Facebook looking for creatives to join a dark ‘Alice in Wonderland’ themed shoot. It was like all my Christmases had come at once so I quickly applied and was stoked to be asked to join the team which included five models, three hair and make up artists, four photographers, a headpiece designer, and an effects specialist.

We all met one Sunday in the middle of a pine forest on the very outskirts of town. Digitaliss Demiwolf and her partner, Rob Nealson, had already spent hours setting up four mini locations as well as the main tea party table, which was laden with the most incredible treasures. I could have spent all day shooting the table alone. The amount of work they put into creating pieces, organising the shoot, transporting everything on site and setting up and packing down was just mind-blowing.

While the models were being styled I helped the incredibly talented Belinda, from Husk & Vine, collect pine cones to use in one of her marvellous horticouture creations. I’d been following her work for awhile and was just thrilled to meet her and assist in the creation of one of her pieces, even in the smallest way.

Once the hair & make up artists were finished doing their thing the models and photographers split off into groups to start capturing the mini wonderland. I was super excited that the footwear designers, Pendragon Shoes, supplied shoes for the photo shoot. I’ve been a fan of their fairy tale creations for almost 20 years (they’ve even made shoes for Neil Gaiman and Amanda Palmer!) and I was so happy to have them share their shoes and creative suggestions. I tend to still get a wee bit overwhelmed on photo shoots and only wish I’d had more time documenting their shoes in the way they deserve.

I first teamed up with model Tiffany Lesley, made up by Ashlee Finnigan, in an area with a small table and an even smaller tea set, which had strong vibes of the scene where Alice grapples with her size and first meets the caterpillar. Tiffany has been recommended to me several times over the years and she was great fun to work with.

Tiffany and I- Image courtesy of Mark Lynam

Next I photographed Taylah Jay, made up by Mellissa Johnston, in a kind of outdoor living room set decorated with vintage props. Taylah looked a lot like the Red Queen so I tried to play up that vibe. There were several vintage furs included in the sets, which I grappled with morally to the point that I nearly pulled out of the shoot, but I tried to make these part of the story. In one image I photoshopped a bunny into Taylah’s lap while off to the side you can see a rabbit fur draped over the chest of drawers, giving the indication that perhaps the Red Queen isn’t so fond of rabbits. It’s a pretty dark concept but these are the places my mind goes …

Afterwards I got to work with the superstar of the day, Digitaliss Demiwolf, made up by Ashlee Finnigan, who posed at the end of a trail of teacups. She was great to work with, needing little direction, and able to pull off several poses and moods. In my head I gave each of the models characters and, although I can’t explain why, I had strong Cheshire Cat vibes from this set.

Perhaps it was this smile

By this time the sun was starting to set creating the perfect lighting for the group tea party scene. We all crowded around the table trying to snap what we could as the models played with the props. It was a tricky situation to shoot, especially trying to get the models to look the same way at the same time, but I ended up with several images I’m happy with. Husk & Vine did such a stellar job with the headpieces and Chloe’s worked perfectly for this scene as it resembled the Mad Hatter’s famous top hat. I’ve no idea if this was intentional!

When I was 18 I had this dream about walking in a forest at night and stumbling upon the Luminaries (heavenly bodies) having a dinner party. I became obsessed with the idea and have since written both a short film and a short story based on the premise. Without having any creative input into conceiving this shoot I was shocked and moved to see it come to life for real.

With the sun disappearing fast I grabbed Chloe Vnt, made up by Mellissa Johnston, and we headed to the last mini set made of mirrors attached to trees. Although my flash started playing up (user error perhaps) the images I took during this small window of time were my favourites from the whole shoot, as Chloe is a natural and I really loved her look.

As we began to pack up I saw the final model, Jocelyn Lothian, made up by Mj Nolan, standing among some long grass looking divine while she waited for another photographer to grab their gear. I was fast running out of time and hadn’t had a chance to work with Jocelyn yet so I used the couple of minutes I had to capture Jocelyn’s regal look and posing.

Throughout this whole process Mark Lynam, assisted by Rob Nealson, was running between the sets creating special effects with his smoke machine and hot ice to add something extra to each scene, while also snapping behind the scenes images himself.

Everyone was so professional and great to work with. My practice is fairly solitary so it’s always a joy to work with other creatives and while it wasn’t always easy with such a big team I’d happily do it again to capture a little piece of magic during an ordinary day.

I’ve chosen 16 images from this shoot for my 2019 calendar, which you can learn more about here.

Hair and Make Up:

Special Effects & Behind the Scenes Photography: