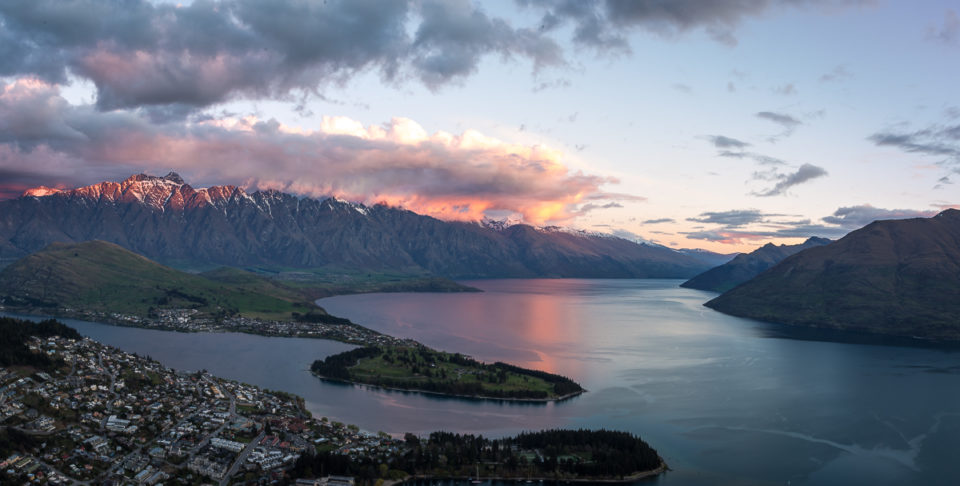 A great spot to photograph sunrise in Queenstown is at Frankton Arm Jetty where there’s a number of picturesque jetties in close proximity with views of Lake Wakatipu and the surrounding mountains. This morning I’d staked out a particular jetty for no other reason than that it was closest to my car and set up my tripod and camera. Along came a couple of tourists who, noticing my tripod, decided that they must also photograph from this exact jetty and proceeded to intimidate me for 15 minutes including nearly breaking my gear until I left, despite there being another jetty 15 metres away. Unfortunately this kind of bizarre, inconsiderate behaviour is somewhat typical of a certain subset of tourist in New Zealand so be warned.

Staring at the offenders

Today we started with a drive up Coronet Peak Road where there’s spectacular views about halfway up (before the road turns into one of the world’s worst and your hire cars are no longer insured) but our petrol tank was running on empty and there might have been some tears so we turned back before we got stuck there forever.

With a tank full of petrol we next drove 20 minutes to picturesque ex-gold mining Arrowtown where everything seems frozen in history. There’s no hurry here so take your time poking through the stores in the quaint little township (but try and avoid the fabric shop if your mother is anything like mine), followed by a stroll through the old Chinese settlement where history and pretty foliage meet. You can even try your hand at gold panning. We ended our visit with an ice cream from renowned Patagonia Chocolates that was as big as my head and I never want to see ice cream again.

Bigger than it looks!

On the way back to Queenstown swing by peaceful Lake Hayes for pretty scenery and photos with friendly ducks.

It’s almost a sin to have been in Queenstown for 48 hours without getting our heart rates racing so we rectified that with an impromptu ride on the Shotover Jet! A ride on these jet boats as they race around Shotover Canyon doing 360 degree spins is a Queenstown rite of passage, and exactly what you need with a stomach full of ice cream. It’s a lot of fun and not at all scary and if I could manage it without losing my stomach contents then you’ll be fine too. Our ride had the added hilarity of being mooned by some random on the beach.

As sunset rolls around take a ride on the Skyline Gondola for the devastatingly beautiful views (with a luge ride thrown in if you’re keen to keep that heart rate up). Up the top there’s a restaurant and bar to whet your appetite or you can catch a Maori culture performance. We were thrilled to spot some friends through the window riding the gondola and spent the rest of the night catching up over beers.

We stayed at: Alexis Motel & Apartments

We wore (in spring): Long sleeve shirt with thermal layers and jeans.

Distance: Queenstown to Arrowtown is approximately 20 minutes drive without stopping.