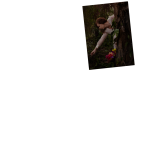 How to shoot and edit the Brenizer Method (aka bokehrama, frame expansion, panorama).

The majority of people with a functioning camera will at some point have snapped a panoramic photo—a process that involves swivelling the body from side to side while taking a series of photos to capture the full range of a scene so beautiful it can’t be contained. (That last bit felt like it needed to be in bold.)

Then a cunning fellow named Ryan Brenizer started using this technique for portraits, but instead of just moving side to side he moved up and down and all around while using a wide aperture to create a very shallow depth of field, and stitched the photos together later in Photoshop. Thus, the Brenizer Method was born, while Internet forums went crazy with green-eyed monsters claiming to have invented the technique first. (Those people tend to call this technique ‘bokehrama’ or ‘panoramic stitching’ because agreeing on one name is apparently too difficult.) A Google image search of any of these terms will fill your screen with examples aplenty but this one by Ryan Brenizer himself seems to be the most common example. And damn right, it’s a stunner.

How the Brenizer Method Works

Let’s say you’re out shooting but you only have a telephoto lens with you. Then someone says “Look at this amazing sunset! Please photograph me in front of it so I can impress my Facebook pals!” With a telephoto lens you’ll only be able take a head and shoulders portrait and miss the sunset entirely OR you’ll have to move so far away from your subject to fit everything in that they’ll barely be recognisable. The Brenizer Method lets you keep your subject close and intimate but still include as much of the scene as you want.

And because you’re using a wide aperture the background will be lovely and creamy and blurry so the background isn’t competing with your subject but is still adding interest and context to the scene. If you’d just used a wide angle lens your subject would be farther away than this technique allows (which is what you were thinking right?)

Why is the Brenizer Method so special?

Admittedly the Brenizer Method can be tricky to pull off successfully and I wouldn’t necessarily want to teach such an advanced technique early on. But in a pared down, form taking shots all around your scene to ‘expand the frame’ (where a wide aperture is optional) is a popular technique for conceptual artists and wedding photographers so I want to at least get you thinking about shooting extra shots around your scene. Here’s some of the reasons why:

To attempt this technique you’ll want to use your longest telephoto with the widest aperture, usually preferencing the latter. I considered using my 70-200mm but figured the f/4 aperture wouldn’t be quite enough, plus I had a brand new 50mm 1.4 that I wanted to play with so I chose this lens instead.

Next you’ll want to find your subject and location. My only available subject was myself which is another reason why I chose the 50mm because I needed to fit myself into one frame. Many photographers who use this technique shoot portraits or models and ask them to hold very still so they can shoot their upper and lower body in different shots, which isn’t so easy with a self-portrait. For my location I was out wandering the neighbourhood when I noticed that some vandal had been getting their kicks chainsawing trees in the local parklands. As I wandered along the felled trees got bigger and bigger until I found this mammoth tree that had been cut down and I came up with the concept of a girl trying to bring it back to life. I also liked that the tree offered a lot of foreground and background interest to add depth to the shot. Generally it’s best to avoid backgrounds with a lot of detail that will specifically need to line up, unless you’re like me and want to make it as hard on yourself as possible.

Some points to keep in mind:

Obviously because I was shooting a self-portrait I had to use a tripod but it isn’t entirely necessary. However, it does help with lining your shots up later.

Here’s how you set up your camera:

When you’re ready take your main shot and then start taking your surrounding shots using a 40% overlap. It’s good to get into the practice of shooting in a pattern, ie in rows back and forth, but if you’re like me you’ll just shoot all around and hope for the best. Shoot slowly and be careful to ensure you have enough coverage. Another really helpful tip which I always forget to do is take a picture of your hand before the sequence and after the sequence to make it easier to identify in post.

While you’re shooting your surrounding shots it’s best not to change the camera’s position but to swivel it up, across and down from one point as if it’s anchored to a tripod (if it’s not already). I made the terrible mistake of removing my camera from my tripod and stepping side to side then shooting above my head and down low. In my mind this made the most sense, like piecing together a puzzle. But in doing so my horizon line was changing which meant putting together my final image was a nightmare I intend never to repeat.

There’s two methods for combining your images together in Photoshop. The first is to combine your shots manually which is fine for 3-9 shots but I certainly didn’t want to attempt it with over 40. The second method is to go to File -> Automate -> Photomerge. Select all your images and check the ‘blend images together’ box (this tries to match colour and exposure between shots). It may take some experimentation to choose the merging option that works best for you. For example, on my first go I tried the auto method and ended up with a terrible mess because I could see that Photoshop had expected me to swivel my camera rather than move it. I then decided to give reposition a go because essentially that’s how I shot it and got a much better result.

Going against all previous advice I chose to try to stitch all my RAW files at once. “I’m patient!” I thought, “I’ll wait for this all day if I have to!” But it wasn’t the time it took to stitch that ended up being the issue. It was that on my first attempt Photoshop wouldn’t save a file that large and on my second attempt my computer ran out of scratch disc space. There’s no real working around these kinds of issues so I bit the bullet and converted all my RAWs to JPEG. It also forced me to get rid of any unnecessary shots that just weren’t needed because I’d been over-cautious and taken too many.

To ease the load on my computer I also decided to stitch 4 images at a time so I ended up with about 7 resulting images that I then stitched together into one.

When this process is done you’ll get an image with white lines throughout showing you the stitch points. Flattening the image removes the lines but you want to leave this until the very end. They are quite handy guides to show you where a stitch occurred so you can follow it along and check you’re happy with the results. If you’re not happy add a layer mask to the problem layer with the button at the bottom of your tools palette and either add more or remove some until the seams look realistic (more on this next lesson).

You will likely come across areas where perspective shifts (areas that won’t line up) have occurred so you’ll need to select the problem spot and use the warp tool (Edit -> Transform -> Warp) to pull areas into place.

By swivelling the camera side to side you may end up with gaps at the top and bottom of each seam. You can fill these areas in using the clone stamp or content aware fill or just crop them out.

I worked on this shot for WEEKS to make the stitches look convincing, all because I hadn’t swivelled my camera and because I’d chosen such a difficult subject to stitch. I was also relatively new to Photoshop so everything took twice as long. If I can do it, so can you.

This is a technique I use in almost all my conceptual photos, although I usually use 9 photos or less and avoid using such a wide aperture because it makes it too difficult to find accurate focus for self-portraits. If you are interested in trying this technique I’d also suggest starting small and don’t make the same stupid mistakes I did! Taking one for the team. 🙂