The Land and I

The Stories of Bribie Island – from ‘The Land and I’ project

Art, Moreton Bay history, Photography, The Land and I | 0 Comments

There’s something strange that happens as you drive over Bribie Island bridge to the smallest of Moreton Bay’s three major sand islands. As your eyes take in the endless water views, the pelicans perched on the light poles and the Glasshouse Mountains shimmering away in the distance you breathe a sigh of relief as you enter island time. Your concerns become limited to whether to laze the day away at Woorim’s Surf Beaches or take a soothing dip in the still waters of Pumicestone Passage. For the more adventurous there’s the option of visiting the island’s 55km of national park explorable only by 4WD or boating down the passage in search of dolphins or seagrass-grazing dugongs. 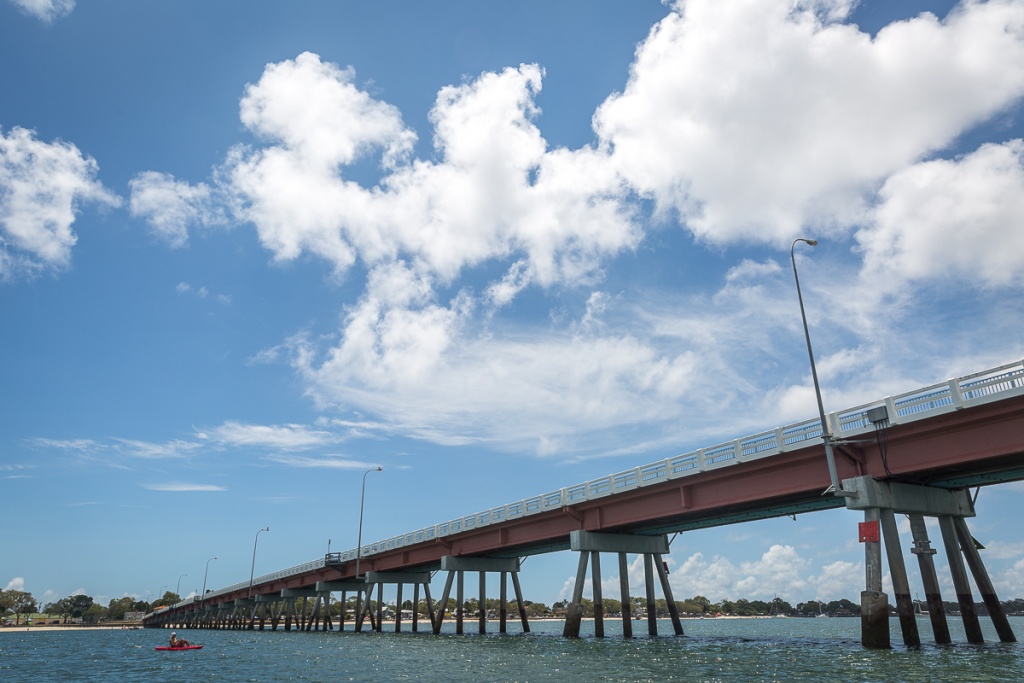 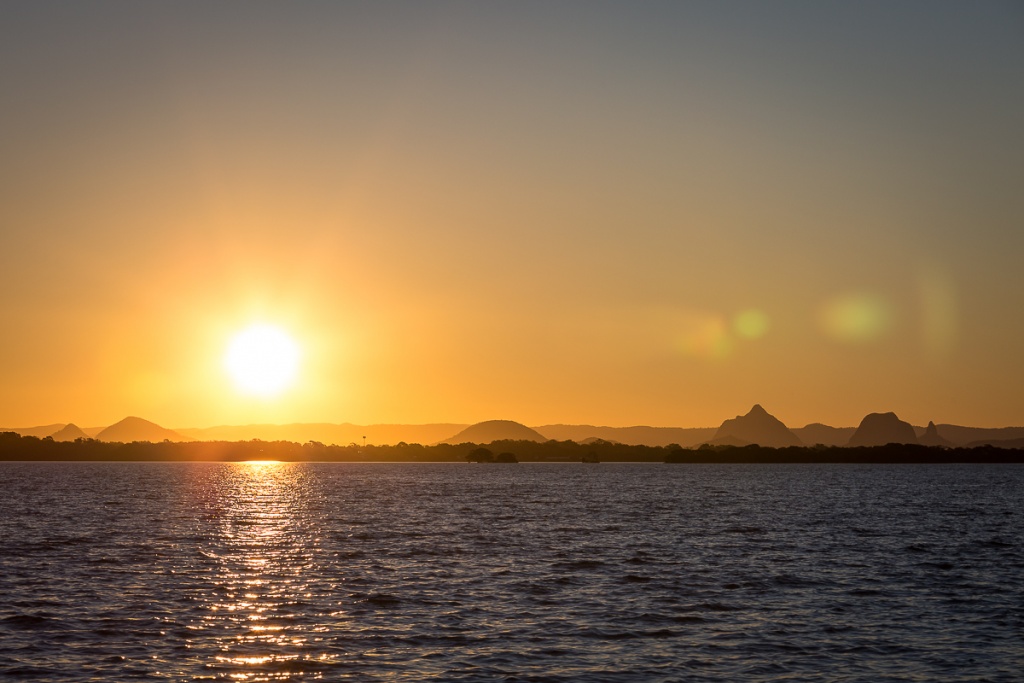 This laidback lifestyle gets under your skin and has inspired generations of tourists to seek solace at Bribie Island. Even Bribie’s most prolific historians have been so touched by the surrounding beauty that they have a tendency to romanticise and embellish the island’s history. 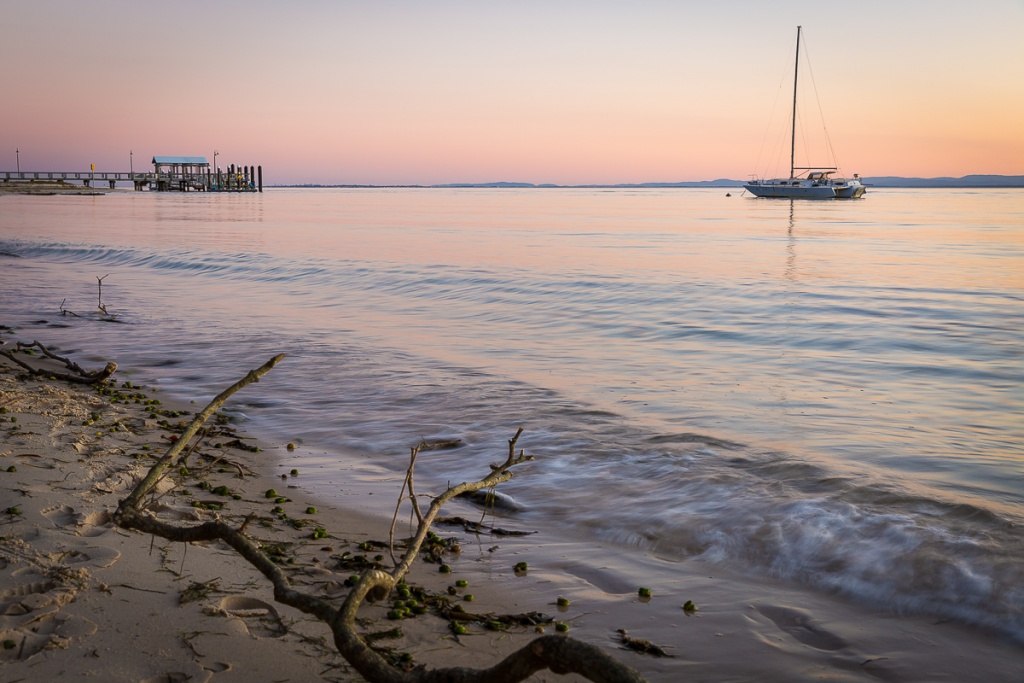 Documented history of Yarun (the name for Bribie Island in local dialect) began in 1799 when a fateful encounter took place between Matthew Flinders and the island’s native Joondoburri people. Flinders and his crew, including the Aboriginal explorer Bungaree, sailed into the area and came ashore where they met with the island’s inhabitants. Flinders offered a cap as a gesture of friendship but the cheeky natives were more interested in his cabbage tree hat which they tried to hook from his head with a stick. Feeling threatened, Flinders returned to the boat and began to row away when a spear whistled past them. In return Flinders fired back, wounding the spear thrower. Flinders appropriately named this spot, ‘Point Skirmish’. 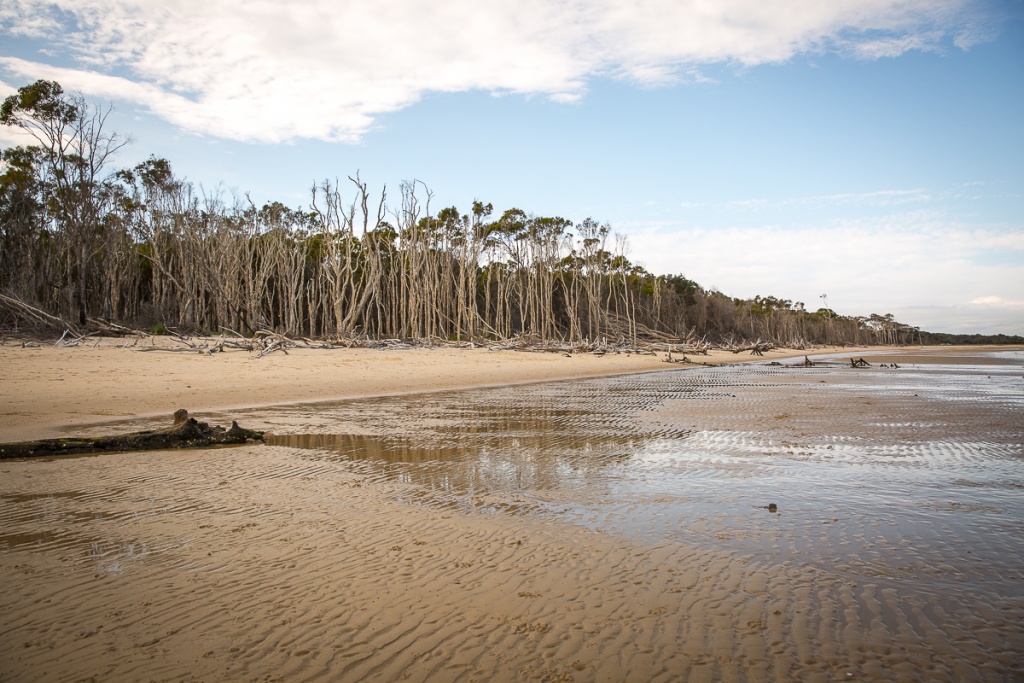 At this time it was estimated there were over 600 Joondoburri people on the island living off the plentiful sea life, having cleverly trained the dolphin population to herd fish toward them. Their next notable encounter took place in 1823 with the arrival of three castaways, Thomas Pamphlett, John Finnegan and Richard Parsons, who had set out from Parramatta searching for timber and were blown wildly off course to become wrecked on Moreton Island. Moreton’s Ngugi people guided the castaways to Bribie Island where they stayed with the Joondoburri. Seven months later John Oxley sailed by searching for an inland river when he spotted an excitable white man on the beach and learned the tale of the castaways. Pamphlett and Finnegan offered to guide Oxley to the Brisbane River and it’s this discovery which convinced Oxley to recommend Redcliffe as the location of a penal colony. Ironically Pamphlett later stole some flour which saw him sentenced to seven years at this same prison. 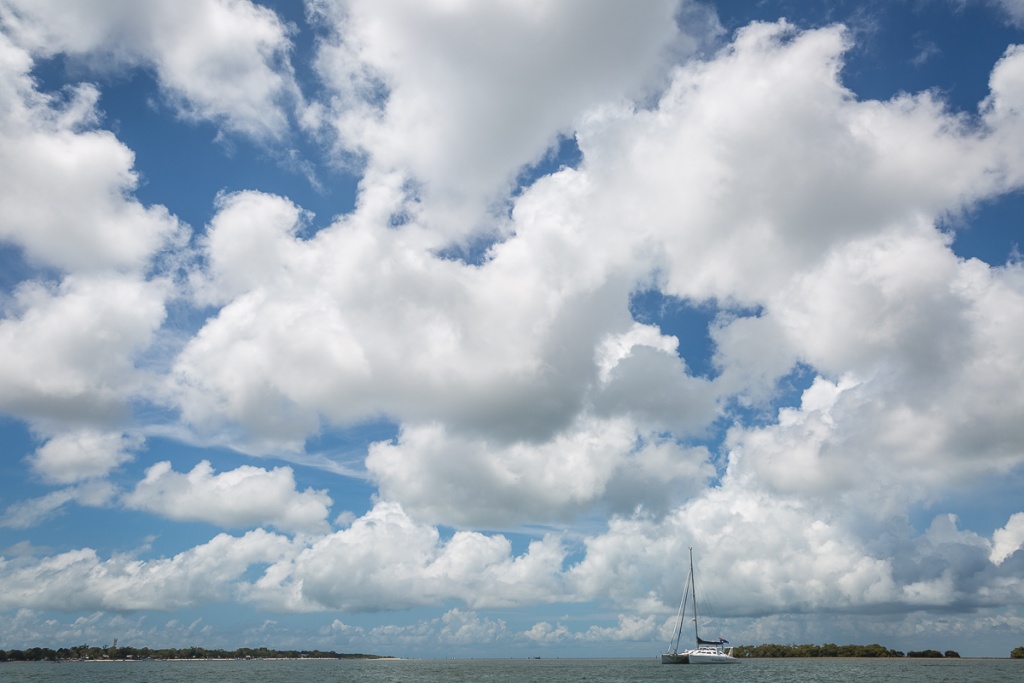 After the closure of the Moreton Bay Penal Settlement in 1842 the area was opened to free settlement which saw the Aboriginal people become dispossessed and their numbers rapidly decline due to drink and disease. In 1877 a reserve for Aboriginal people was established at the Bribie Island suburb of White Patch, overseen by Tom Petrie. They were supplied with a boat, fishing nets and harpoons and those who worked, as well as the elderly, were given rations of sugar and flour. Two years later the reserve was deemed a failure and closed, much to the dismay of the Aboriginal women and elders who felt safe there from the drunken brawling of the younger tribesmen.

By the 1890s oystering in Pumicestone Passage was Queensland’s largest industry supplying roughly 300 bags per week, but this ended abruptly in 1909 when black worm destroyed most of the oyster banks. 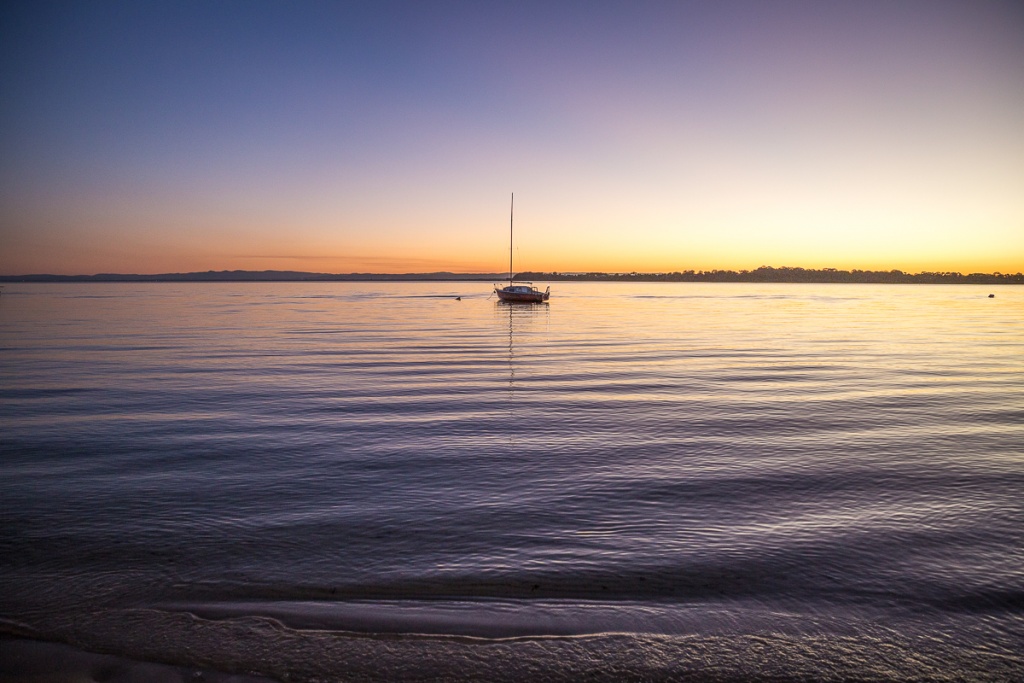 In 1897, less than 100 years after the arrival of Europeans on Bribie Island, the last full blood member of Bribie’s native Joondoburri people, Kal-Ma-Kuta (also known as Alma Turner) passed away. One day, while gathering oysters she saved a drowning man, Fred Turner, who she later married and bore seven children. Her death was a great loss to the community and today a monument in her honour stands at Sandstone Point.

Bribie Island’s reputation as a tourist destination began in 1883 when the SS Mavis commenced weekly ferry trips to Scarborough, Woody Point and Bribie Island. Early tourists were collected by Artie Bestmann in a punt and transferred to shore. As popularity grew the Brisbane Tug and Steamship Company built the SS Koopa (Aboriginal word for flying fish) which arrived from Scotland in 1911 licensed to carry 1153 passengers. The Koopa left Brisbane at 9am, stopping at Woody Point and Redcliffe, arriving at Bribie at noon and departing at 3pm. The trip was a lavish experience with guests entertained by an orchestra, casino, dances, gourmet food and bar. In 1912 the Brisbane Tug and Steamship Company built a jetty for passengers to disembark safely. They also established a camping ground and holiday huts nicknamed ‘The Twelve Apostles’ located in front of the present library. In 1915 the Government gazetted Bribie Island a township and in 1921 Hall & Bestmann opened the island’s first store. 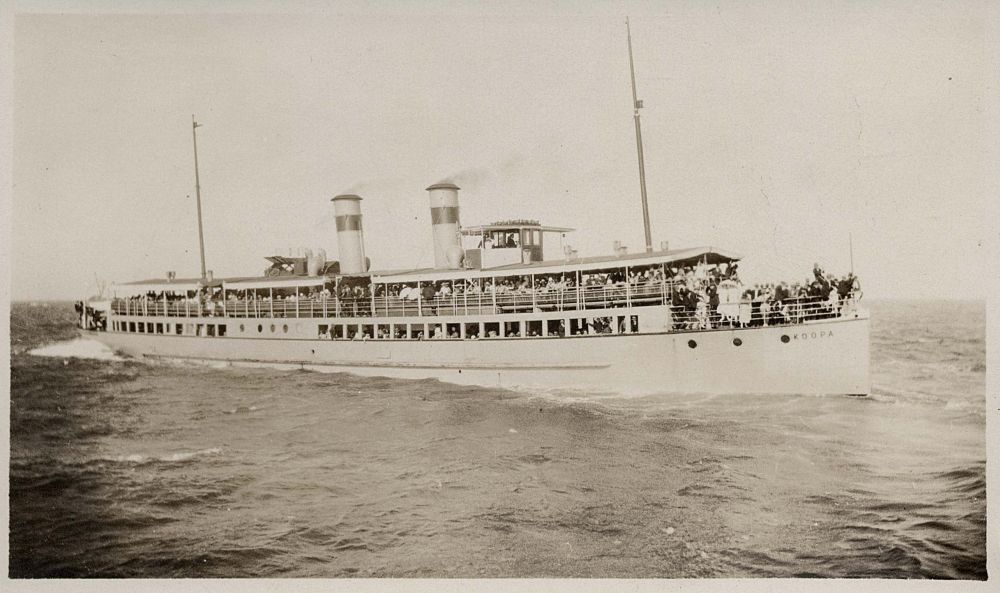 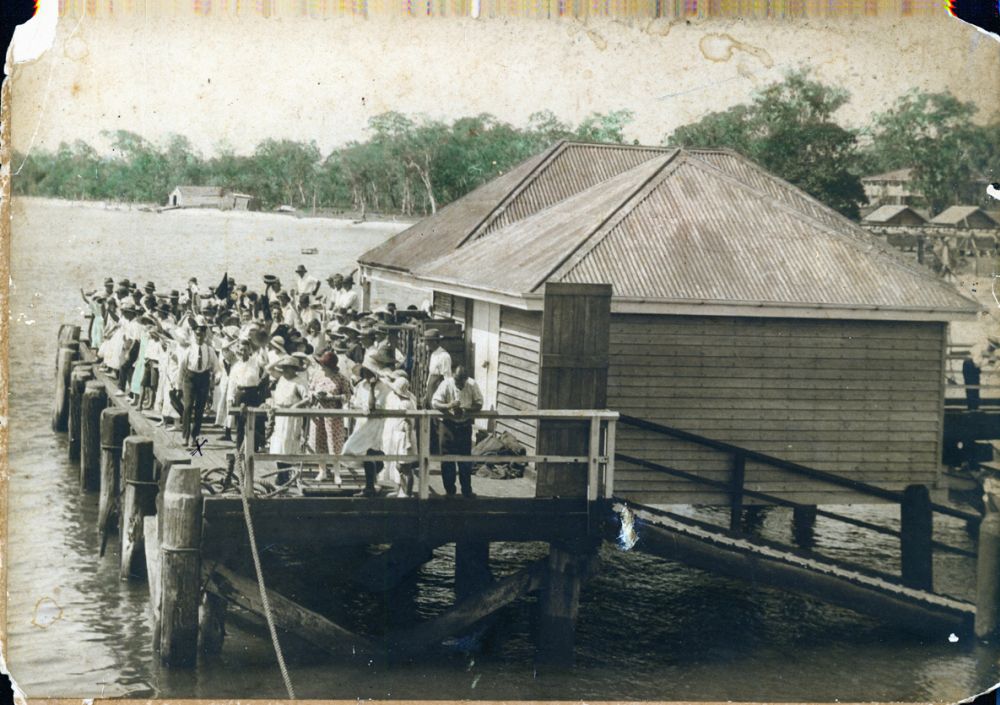 To cater to the thousands of weekly tourists a second steamer, the SS Doomba, carried a further 1500 passengers, but offered a less grand experience. A dance hall was transported from Moreton Island to where the water tower now stands, becoming the hub of Bribie’s social life.

Reportedly, boat days were always chaotic. Three short horn blasts announced the arrival of the ferries in the passage and locals would appear out of nowhere with boats, horses and carts to peddle their wares to tourists, that’s if they weren’t heading aboard to drink at the bar. In 1927 Caboolture Shire Council conducted a health inspection of the camping area and discovered over 1000 people residing in the 135 tents and huts. Shortly after the Great Depression hit killing off tourism and leaving the ferries virtually without passengers. In 1937 author and historian Thomas Welsby wrote a book called ‘Bribie the Basket Maker’ reportedly in an effort to re-invigorate tourism but with the added effect of bringing a legend to life. The book claims that Bribie Island was named after a convict whose basket weaving and fishing abilities won over Government officials allowing him to go where he pleased. While at Bribie he fell in love with an Aboriginal woman who he ran away with shortly before the end of his sentence. He later returned to Brisbane and was pardoned. It was said that whenever anyone went missing from Brisbane they were ‘Down with Bribie’ and hence the island got its name. You can read the story here.

Historians have long pored over the facts of ‘Bribie the Basket Maker’ but have found little evidence to prove its credibility. Even Welsby himself admitted it was based on a couple of vague references to a man named ‘Bribie’ in ‘Tom Petrie’s Reminiscences’. However this has never stopped it from being widely reported as historical fact. Most historians prefer to believe it was named after an Aboriginal word for the koala, Boorabee (which is complicated because this was not the Joondoburri word for koala).

In 1939 there was a brief resurgence in tourism but it was cut short by World War II in 1942 when the island was closed to non-essential civilians and taken over by US and Australian troops. Fortifications, some of which still stand today, were constructed as part of SE Queensland’s defence. It is said that Red Beach inherited its name from the military’s use of colours as code names. Both the Koopa and Doomba were put into service by the Royal Australian Navy. 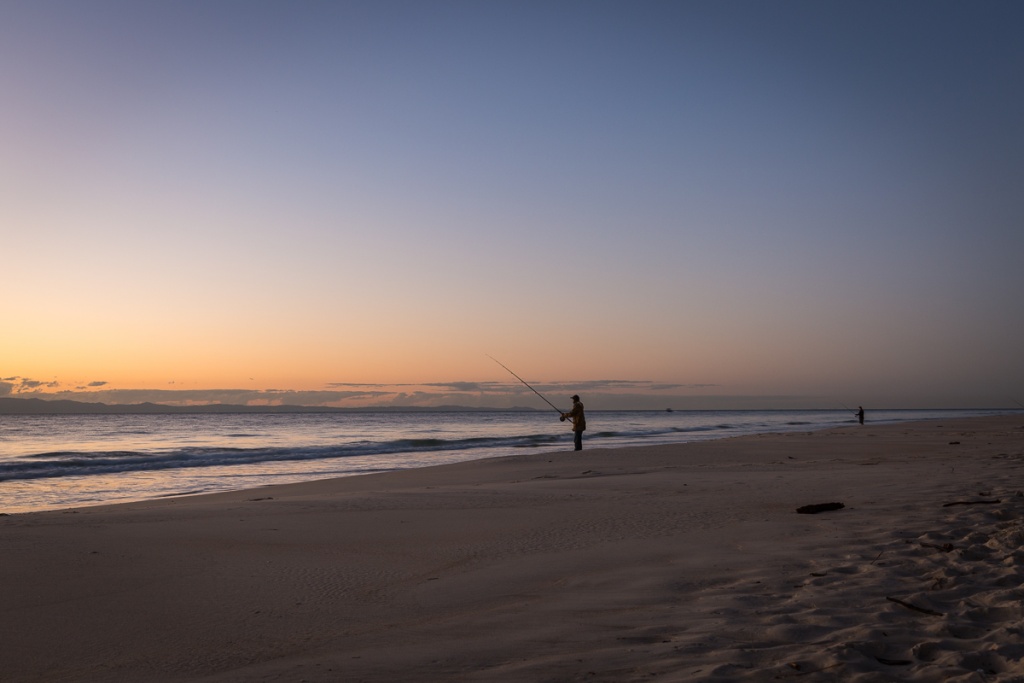 In 1946 the Koopa resumed its tourist run (featuring a family-friendly milk bar to replace the hotel) but by then Bribie Island no longer held its allure with holiday makers driving past in favour of other destinations and many of the residents failing to return after the war. The Koopa made her final run in 1953 and was scrapped in 1961. In the meantime a barge ferried cars onto the island until 1963 when the Bribie Island bridge opened and settlement of the island proceeded at a rapid rate.

Bribie’s claim to fame arrived in 1953 in the form of famous artist Ian Fairweather. At 62 he came to live on Bribie in an isolated grass hut where he created his most renowned paintings until his death in 1974. The council banned camping from 1974 onwards. The National Park was declared in 1989. 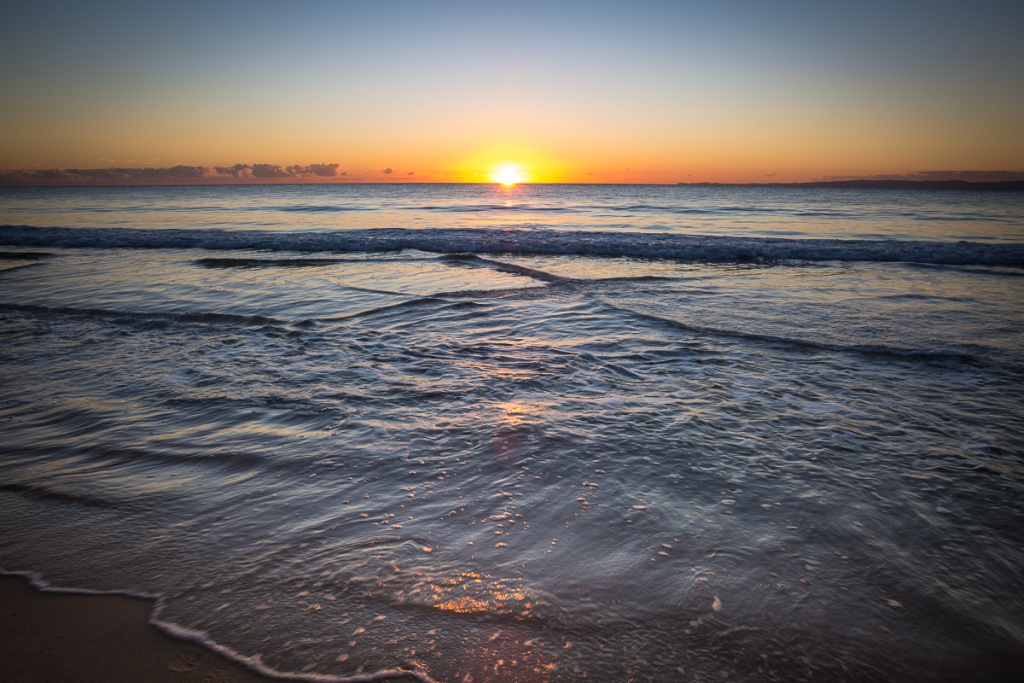 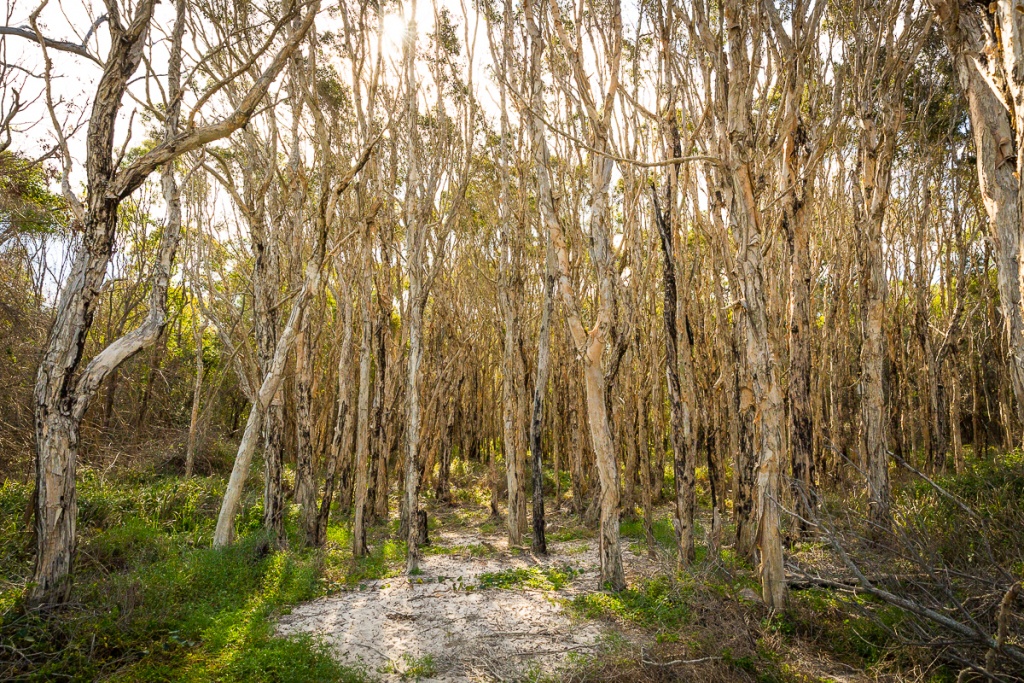 Today Bribie Island is a popular spot for retirees and family gatherings. It exudes a sleepy charm although a sunny summer day certainly draws the crowds. There are plenty of water sports to enjoy on Pumicestone Passage while landlubbers may prefer to visit the Bribie Island Seaside Museum, the Butterfly House, the Community Arts Centre, or the weekly Sunday markets. Enjoy a meal or concert at Sandstone Point Hotel or choose from one of the many beaches to set up your picnic spot. There’s also a choice of walking tracks and more bird species than Kakadu with Buckley’s Hole Conservation Park being the best place to spot some. 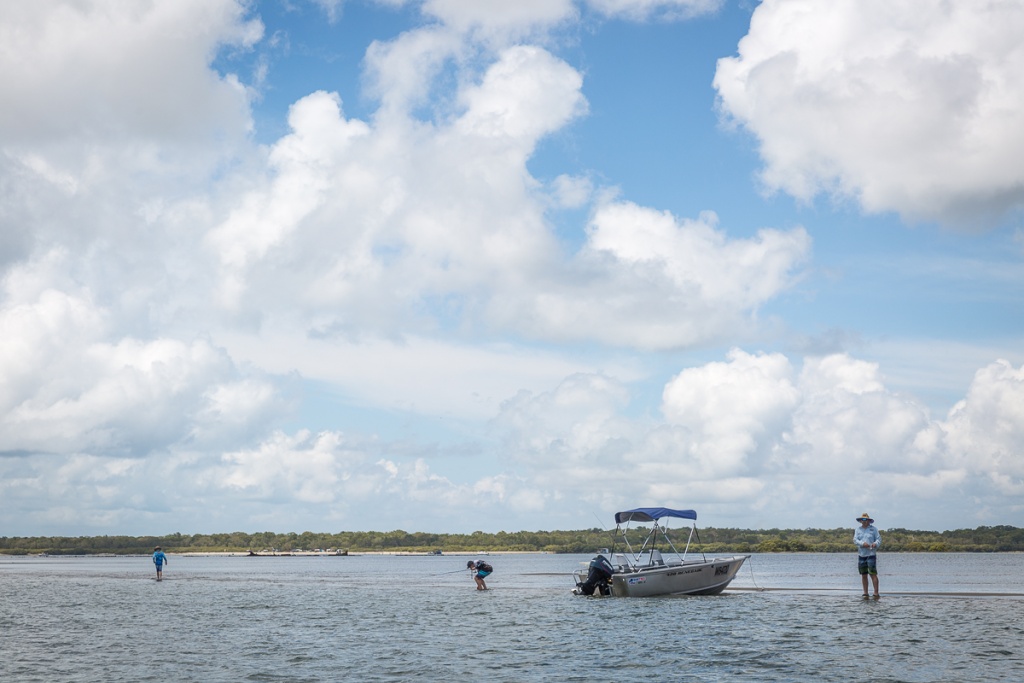 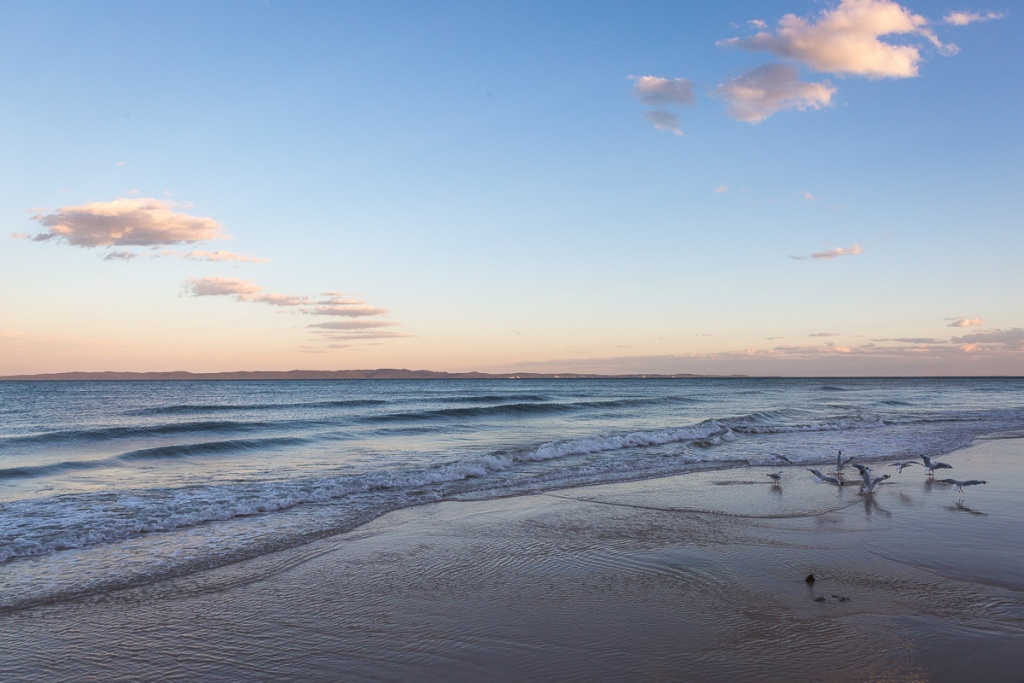 With all this on offer, if you happen to disappear from everyday life, we’ll just assume you’re ‘Down with Bribie’. 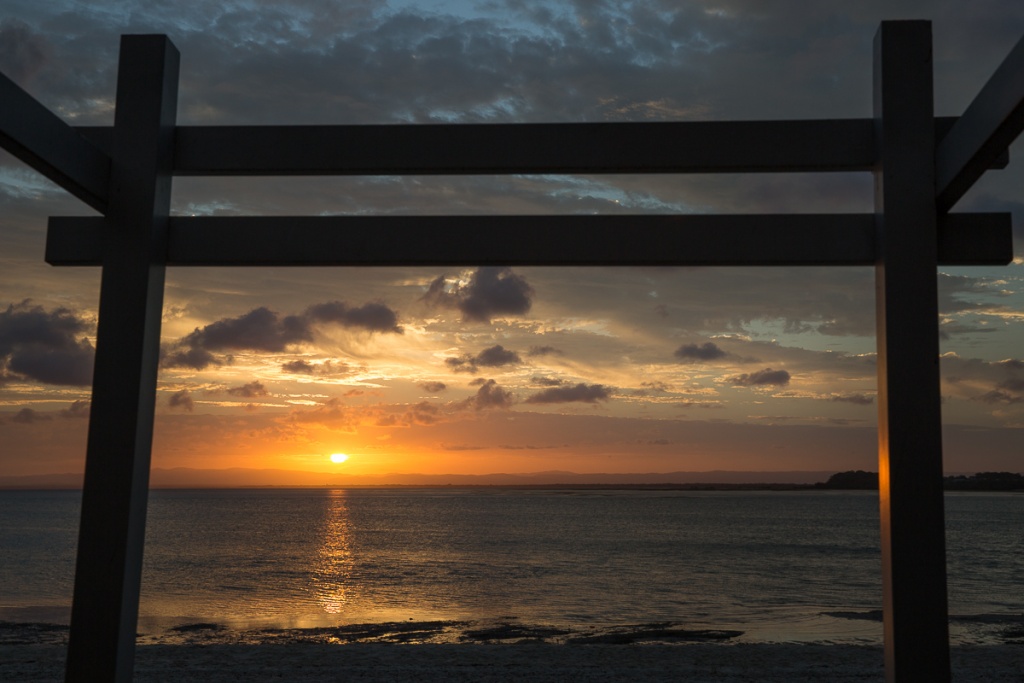 I decided to base this image on Thomas Welsby, not only for his penning of the influential story ‘Bribie the Basket Maker’, but also for his contribution as a prolific writer and historian (among other things) to the Moreton Bay region. One of the main streets on Bribie Island, Welsby Parade, is named in his honour.

I’ve depicted him standing on Red Beach, somewhat near where the skirmish likely happened between Flinders and the Joondoburri people (Point Skirmish has since been mislabelled on maps of Bribie). Red Beach, the island’s dog beach, is the most visually interesting and wildest of Bribie’s beaches being on the southern tip closest to Moreton Bay. 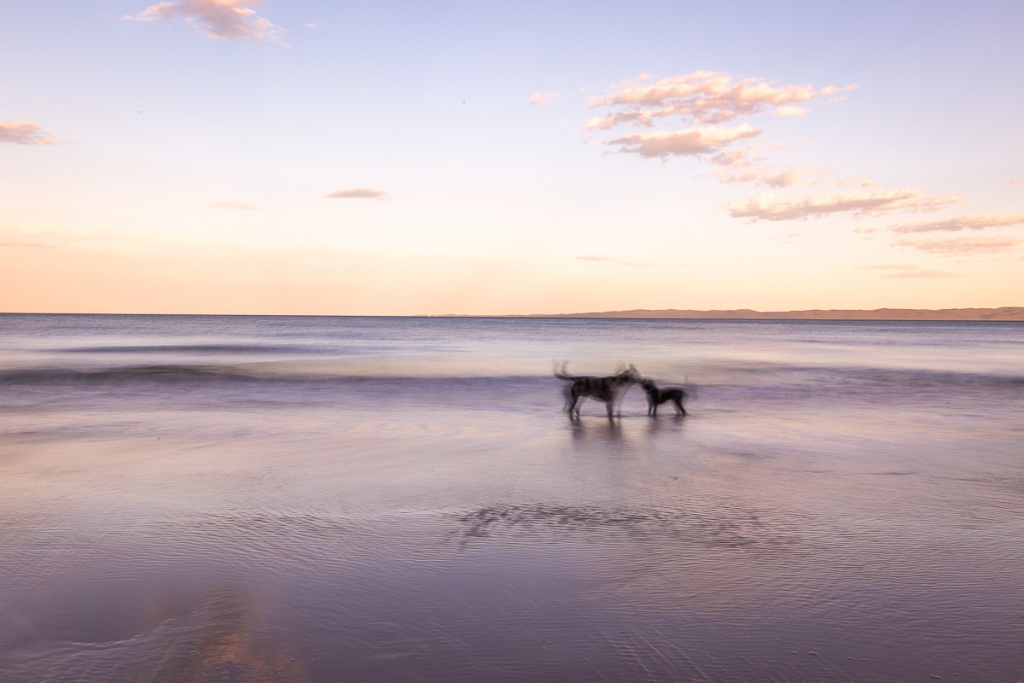 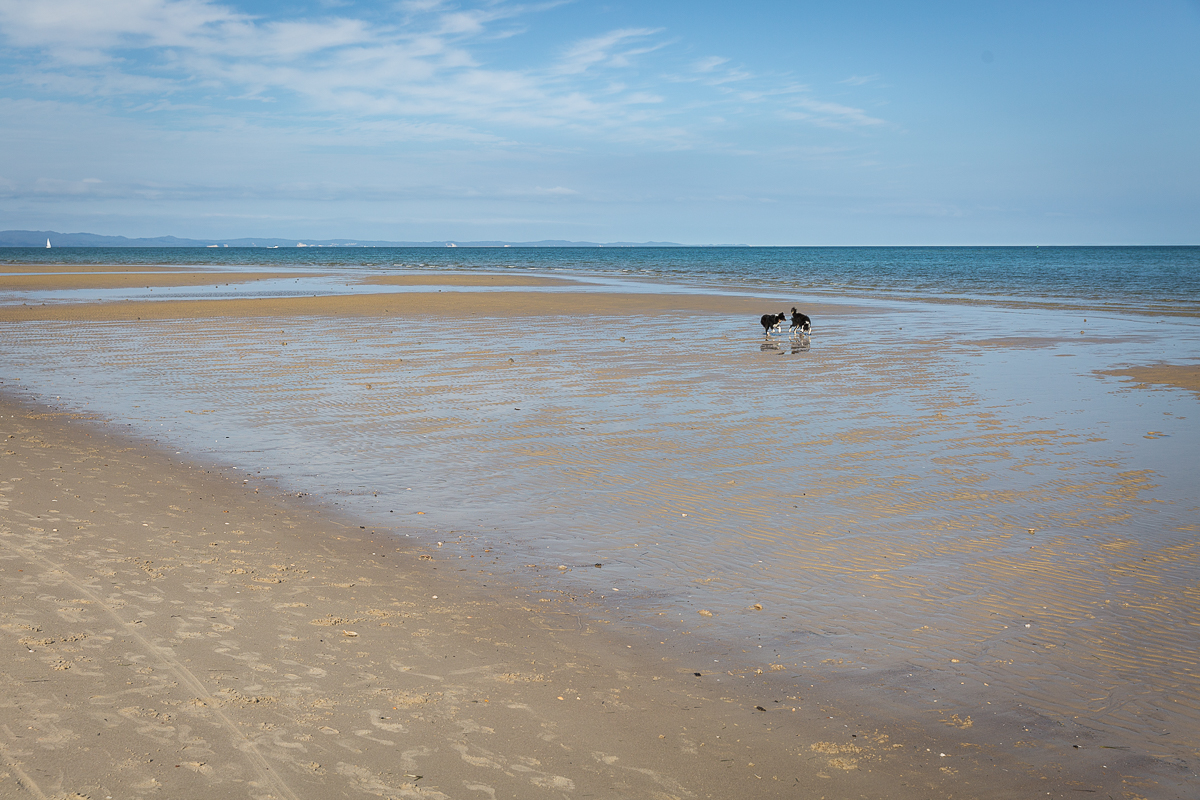 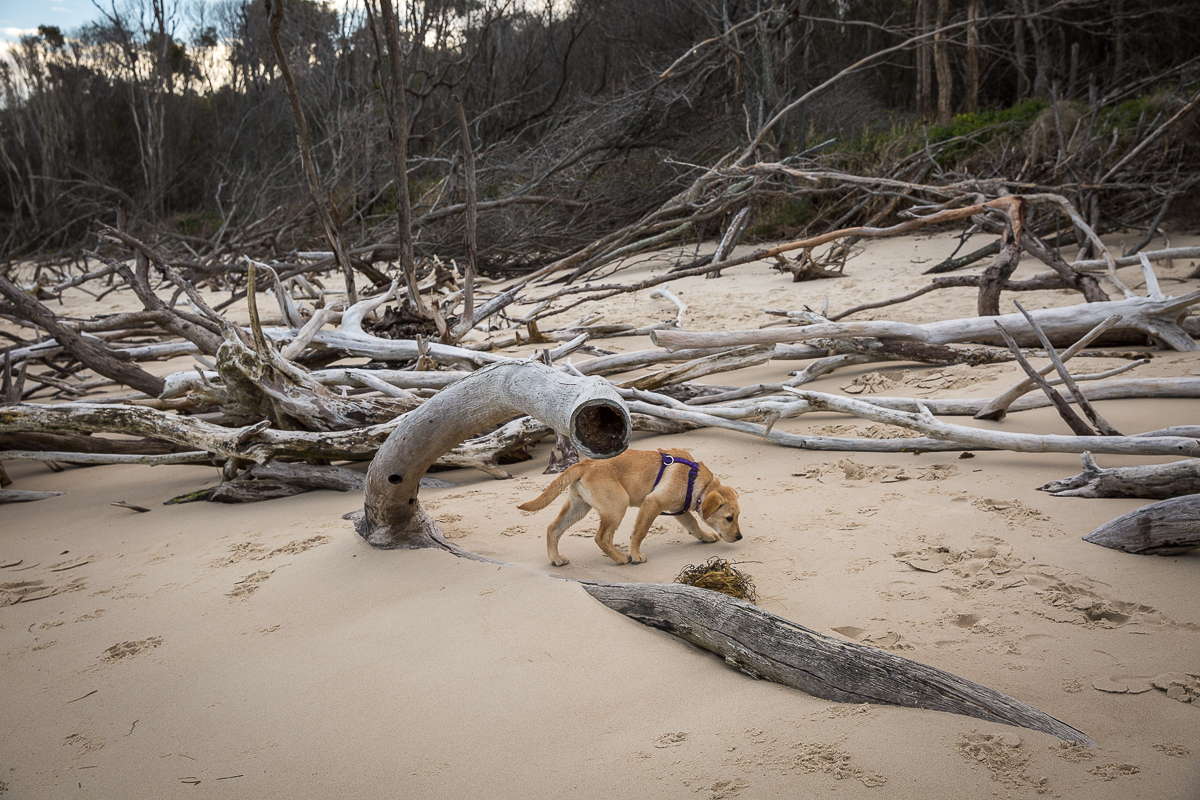 I’ve included a traditionally woven crab basket to allude to the island’s Aboriginal name ‘Yarun’ (meaning either crab or hunting ground) as well as being the primary tool of Bribie the Basket Maker, enabling his escape to the island. I’ve included Bribie and his island ‘Cleopatra’ come to life from the pen of Welsby in the background.

The koala is a reference to the unproven belief that the island was actually named after an Aboriginal word for koala, Boorabee. There are no longer any koalas on the island as they were driven to extinction by hunting during the 1920s.

During low tide you can walk 8km via Red Beach from Bongaree to Woorim, but keep in mind there are no amenities in this area. Most of the beach is dog friendly and it’s a great place to spot sea creatures and birds of prey. The beach is ringed by trees and covered in interesting driftwood. There are four unpaved access roads to Red Beach with the road from Tully Street getting you closest to the area featured in the photo. 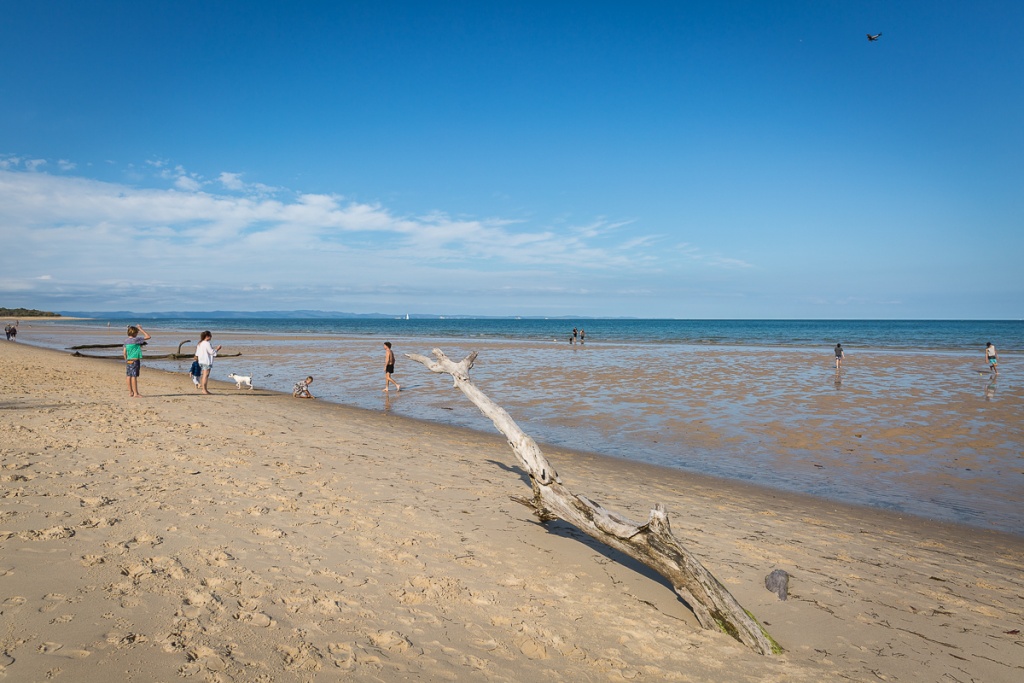 I invite you to share your own stories, photos and experiences of Bribie Island in the comments below so we can create a living history of this moving place for future generations.