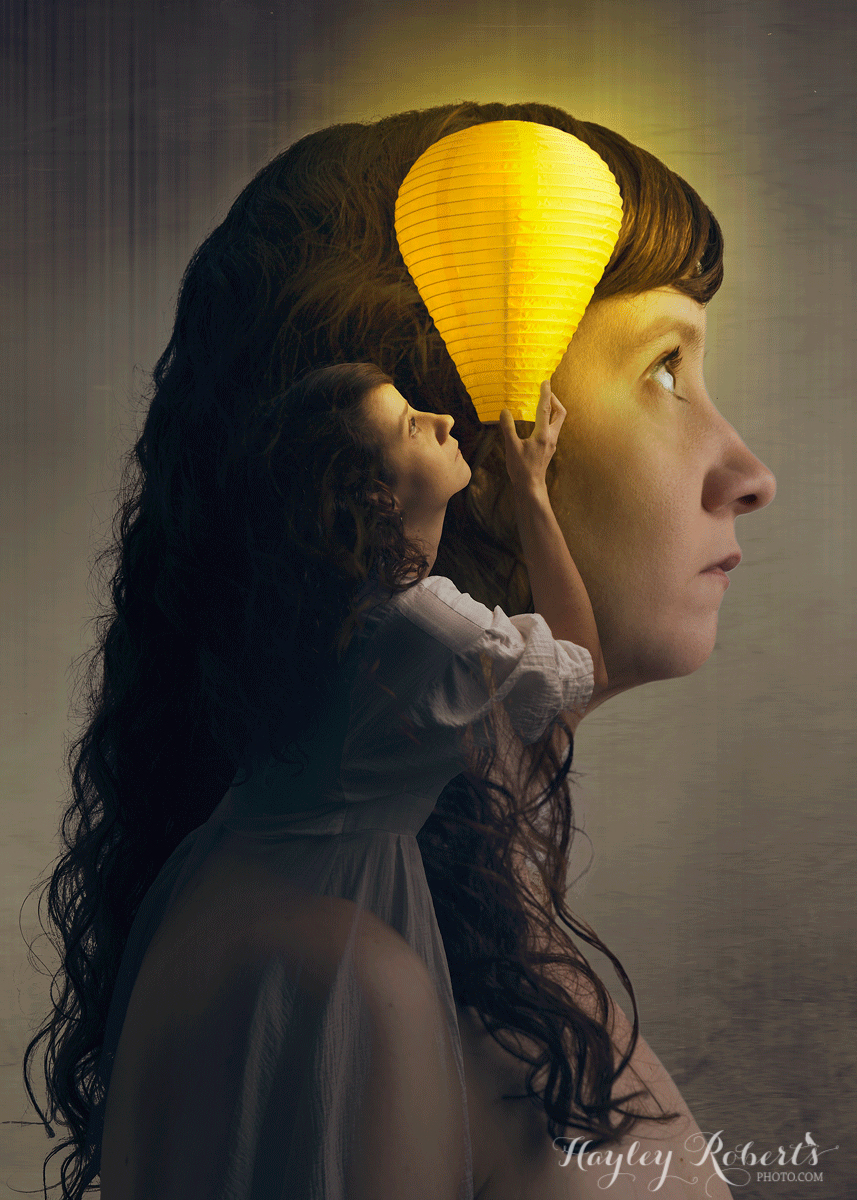 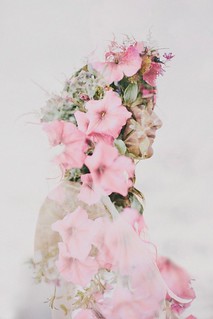 'Under the waves' by Aneta Ivanova[/caption] If I were forced to choose one photography technique to spend the rest of my life perfecting it would be the double exposure portrait. This involves taking one portrait and one scenery shot and smooshing the two together. The popularisation of this technique is attributed to Sara Byrne but for me it’s Antonio Mora who truly made it an art form. I also think the work of Aneta Ivanova is really beautiful. My biggest problem with this technique is that it has such a dull name—the double exposure portrait—so I’d really love to coin a new term for it. The ‘portscape’ perhaps? For a long time I assumed this technique would be really hard to do. Anything with such utterly stunning results could never be simple, surely? Well fortunately I was wrong. Not only is this technique easy it’s also SO MUCH FUN.

How to photograph a double exposure portrait (aka portscape)

There’s two ways to shoot a double exposure portrait depending on the tools you have to hand.  If you’re lucky you may have a camera that has this feature inbuilt, like my Canon 5D Mark III, so be sure to check your manual. If not, you’ll just have to photograph your two exposures separately and combine them in Photoshop—a method which offers much more control. 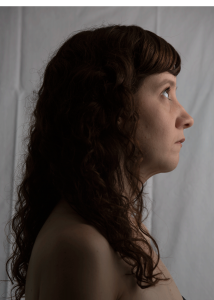 In either case you’ll need to shoot the portrait first. Your second image will show through in the areas where your first image is darkest. Therefore it’s best to shoot your portrait against a light background to retain the silhouette that will contain your second image, whether this be against a white sheet or a blown out sky. I shot my image in my garage against a white sheet. I used a Speedlite with a shoot through umbrella to spill light onto my face because I wanted less of the second image to be visible over my features. I kept my hair dark because I wanted more of the second image to show here. Then you’ll need to shoot your second image although if you don’t have a multiple exposure capable camera, feel free to just use images from your back catalogue. I expected there’d be some exact science for capturing the precise lights and darks for your chosen images to match, and maybe there is, but because of the unpredictable nature of this technique I’m yet to put my finger on it. From my own experimentation I can tell you that flowers and buildings look the best and blue skies look the worst.

The really great thing about doing this in camera is that you don’t have to shoot your portrait DIRECTLY beforehand. All you need to do is make sure your portrait is on the same card that you’re shooting your second shot on. So I shot my portraits, imported them to Lightroom, chose my favourites and loaded those back onto my card. The other cool thing is that when the camera creates your combined image it also keeps a copy of both the single exposures separately so you can then play around with the two images later in Photoshop if the merge didn’t come out exactly how you wanted. When you’re ready press the Creative Photo button, choose the middle Multiple Exposure button, and press SET. Select ‘Multiple exposure’ and choose On:Func/Ctrl. I’m not going to cover what the other settings do because our purpose here is just to create a double exposure portrait. For ‘Multi-expos ctrl’ I find ‘Additive’ works best but feel free to play around with the other options. Choose ‘Select image for multi. expo.’ and find the image you want as your base portrait. *Images courtesy of Canon. [gallery columns="5" size="medium" ids="1813,1815,1816,1812,1814"]   You’re almost ready! Switch Live View on so you can actually see how the two images look overlaid. Choose the exposure for your second image and move your camera around until the two images are combining in a pleasing way. Sometimes you may end up with your camera upside down, which will be sure to amuse any other photographers standing nearby. Don’t let them ruin your artistic genius! Focus and press the shutter button and you’re done. This shooting process takes time so you don’t want to be in a hurried situation. Annoyingly you’ll need to load your base image each time you want to take a different double exposure. (If you choose ‘continuously’ in the Multiple Exposure menu the next photo you take becomes the base for the following image and so on. If anyone knows a way to keep an image loaded please let me know!)

How to edit a portscape

If you’ve shot your double exposure in camera then it may not need further editing but I was interested to see what variation I could get from the same images when combining them myself. The camera gives you four blending modes and three aren’t so great whereas Photoshop gives you over 25. In finding images to combine with my portrait I wanted to experiment with three different options: Interestingly I found the images I’d shot specifically while creating double exposures in camera worked much better than any I selected from my catalogue, even though I hadn’t really liked how they’d originally looked when combined in camera.   [caption id="attachment_1817" align="alignright" width="960"]

Shot in camera. I should have cleaned up the portrait backgrounds first but the grey backdrop allowed more of the second image to show through.[/caption]     [caption id="attachment_1821" align="alignright" width="240"] 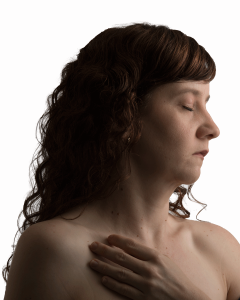 Cleaned up background[/caption]   Load your portrait image into Photoshop. Because the background of my image wasn’t a uniform white I had to do some clean up work so I used the magic wand (w) with contiguous turned ‘off’ to select my background. I turned this selection into a layer mask with the 'Add layer mask' button and then chose Select->Refine Mask to fine-tune the selection around my hair. Had I shot my  portrait against a cluttered background then this selection process would have taken much longer. I created a ‘solid color’ adjustment layer filled with white and dragged this underneath the portrait layer. Now I had a perfectly white background behind my portrait. Next load your second image(s) in layers above the portrait. I usually select these images in Lightroom, choose ‘Edit in-> Open as layers in Photoshop’ and then from the resulting document I use the move tool (v) to drag the images one by one to my main portrait image. I’m sure there’s a better way but this is just my process. 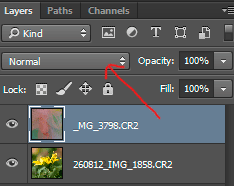 Start playing around with your blending modes. I introduced these to you last week but to recap … Your blending modes live at the top of your layer’s palette in the dropdown box that says ‘normal’. Click the drop down menu and select each of the different blending modes until you find one that blends your images together best (a shortcut for this is to make sure the move tool is active (v) and then press Shift + or Shift – to cycle through the modes quickly.) The blending mode that worked best for me was usually ‘Lighten’. You will probably have to move your top image around so it fits to your portrait in a really nice way. I tried to line up aspects of my second image with my facial features. [gallery columns="4" size="medium" link="file" ids="1838,1837,1836,1835,1834,1833,1832"]   At this point you can get really fancy and start messing with things like levels and curves to change the contrast and colour of your images, masks to paint out anything you don’t want seen and duplicating parts of your second image to fill in areas that need more detail. But it’s totally up to you. For now I chose to spend more time on double exposures that just work, rather than forcing them to look better. Sadly the MacBook Pro I use for editing died during this process (happily it was saved ten days later) but I didn’t get to play around as much as I’d hoped to with this technique so I’m really excited about future experiments. [gallery columns="4" size="medium" link="file" ids="1828,1827,1829,1830"] [gallery columns="4" size="medium" link="file" ids="1831,1839,1841,1840"] [gallery size="medium" link="file" ids="1825,1824,1826"] 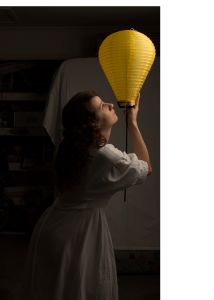 How I shot The Idea

Right after I shot my self-portraits in the garage I photographed myself holding a lantern shaped like a lightbulb (purchased from the Leukaemia Foundation). I wanted the scene as dark as possible with just some light on the lantern and my face (from a Speedlite with a shoot through umbrella) because I only wanted the face and lantern showing up in the hair of my main portrait image. At the time I didn’t know if it was going to work but I’m pretty pleased with how the two shots combined using the blending mode ‘Lighten’. Good idea don’t you think? ;)

How to create a double exposure photograph (portscape).

If I were forced to choose one photography technique to spend the rest of my life perfecting it would be the double exposure portrait. This involves taking one portrait and one scenery shot and smooshing the two together. The popularisation of this technique is attributed to Sara Byrne but for me it’s Antonio Mora who truly […]