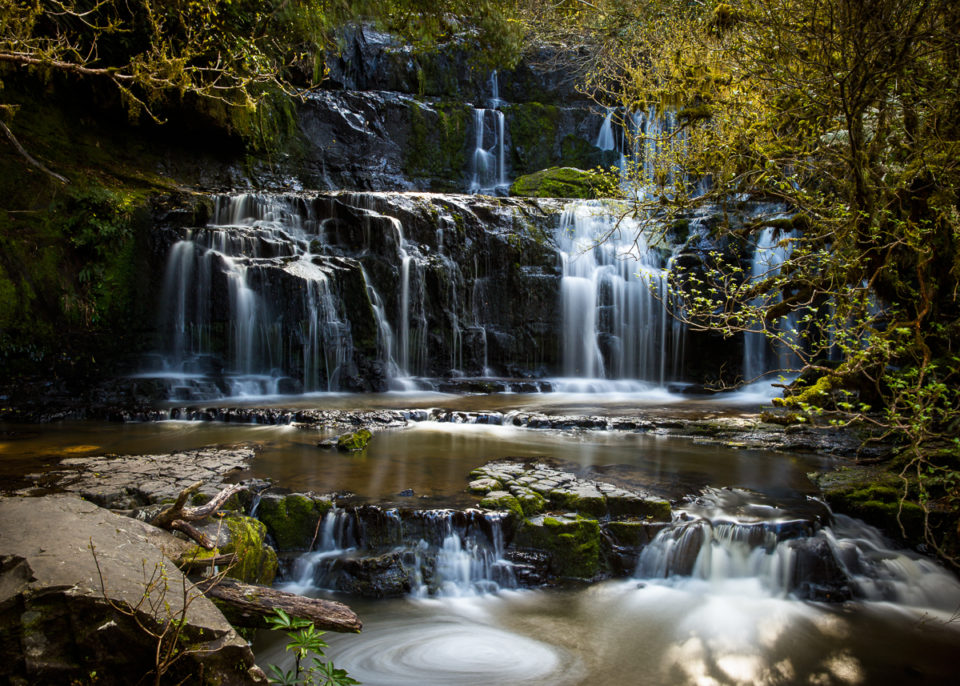 The best part about staying at Larnach Castle was waking up in a goddamn castle and for a very brief moment this morning the dense fog cleared and we were able to see the breathtaking view that surrounded the property … before it were gone just as quickly.

After a lovely breakfast in the stables we took the audiovisual self-guided tour and learnt about the castle’s origins and tragic history followed by a wander through the gardens enjoying the little tributes to Alice in Wonderland.

Hanging from the ceiling. Yeah, I dunno either.

How badly does this picture need a white rabbit?

Our destination today was Invercargill but the journey was more about meandering through the Catlins to get there. The Catlins is an area of “rugged coastlines” “overlooked by tourists” which I can vouch for because I counted on one hand the cars we passed along the way. It’s one of those places where there’s no specific itinerary except to drive through and pull over at anything that takes your fancy. But I should have known by how hard the marketing tries to get you there that it would actually be disappointing. (Mind you a tour guide suggested we may have visited at the wrong time of year, so who knows? Seriously though – just skip it.)

Farmland on the way to the Catlins

The maps suggest a number of notable stops but from our experience most of them require lengthy drives along loose gravel roads with no guarantee of what you want at the end (I’m looking at you seals). These conditions made our drive more stressful than relaxed and I’d suggest if the Catlins truly wants to be a prime tourist destination they’ll need to pave their roads and maybe throw in a couple of cafes and servos.

The stops we chose to visit were:

The view from the Lighthouse

Purakaunui Falls, two seconds later there was someone standing in this shot

Invercargill seems to have a weird obsession with fast vehicles and not much more. If you are following along with this itinerary I would suggest skipping the Catlins and Invercargill altogether and use the extra night either in Wanaka to explore Mt Aspiring, or in Lake Tekapo for some star viewing with the extra day in Mt Cook doing another walk.

Distance: From Dunedin via the Catlins to Invercargill is approx 3 hours 50 mins drive not including scenic stops. It takes 2.5 hours if you take the direct road (ie. not through the Catlins).