The Land and I 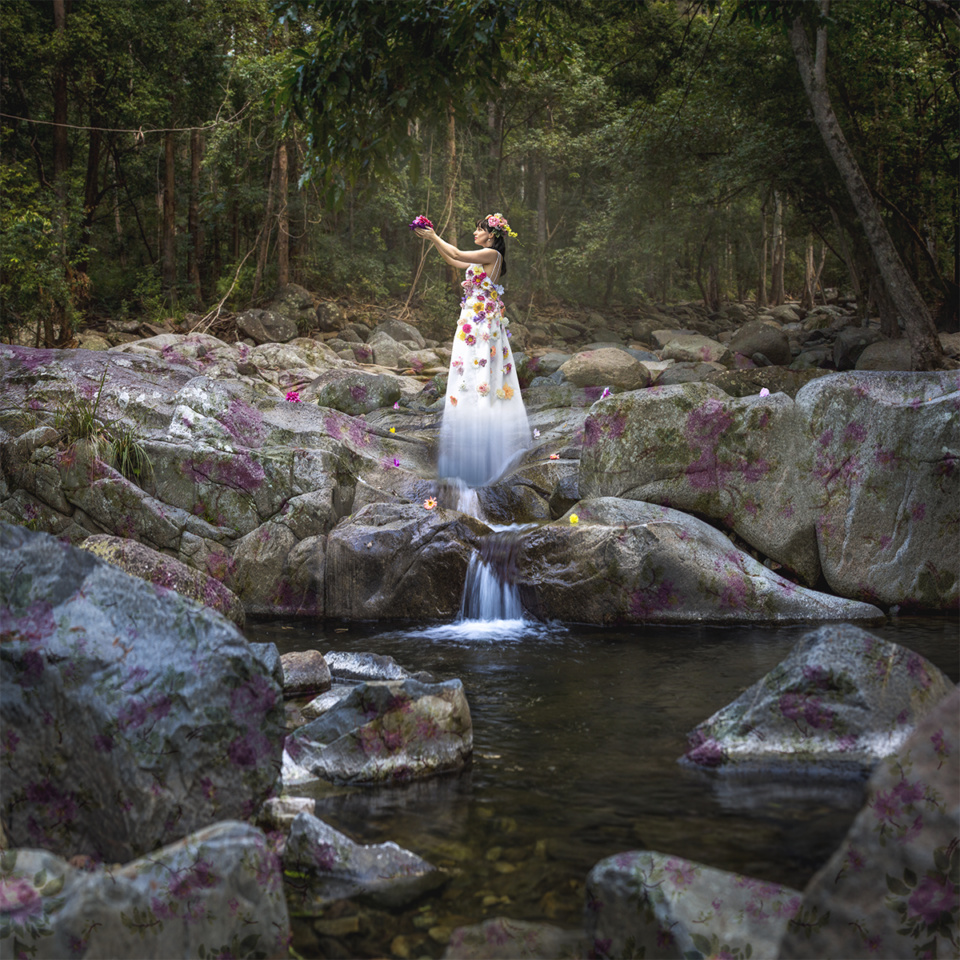 The Stories of Cedar Creek – from ‘The Land and I’ project

Art, Moreton Bay history, Photography, The Land and I | 4 Comments

Cedar Creek is a haven of babbling brooks, towering trees and granite sentinels at the foot of the D’Aguilar Range near Samford, Queensland (not to be confused with Cedar Creek at Tamborine Mountain). With so much natural beauty on offer it’s hard to believe how closely it nudges suburbia being merely 40 minutes north-west of Brisbane’s city centre. Speaking with born and bred Moreton Bay residents I was surprised to learn that everyone had a story from their youth of spending time at Cedar Creek; swimming at the waterfall, jumping off the cliffs, or swinging on the ropes.

It’s believed land in the area was first inhabited at the start of the 1800s, became a cattle station in the mid-1850s, and was subdivided into saleable properties during the 1870s when a 200 acre block cost 200 pounds. Aborigines are known to have lived beside Cedar Creek in the early 1900s, but there is no documentation of its Indigenous history prior.

Despite the name ‘Cedar Creek’, there’s not a single Cedar tree to be found. Throughout the early 1900s Cedar Creek was recognised for its excellent timber, particularly pine and red cedar, and logging became a significant industry that eventually died out due to oversupply. Cedar has now completely disappeared but a number of Brisbane’s churches were built using timber from the area so it’s nice to think they still live on in a place of worship. Also notable is that Macarthur Chambers in Brisbane City was built with pink granite mined from Cedar Creek.

During the 1920s dairying and pig farming became popular and the fertility of the region saw all manner of crops being farmed with pineapples and bananas being particularly successful, although Bunchy Top disease killed off the banana industry ten years later. The area has become no less fertile over time with rich soil and plentiful water allowing market gardens to prosper. Farmer’s markets were held locally every Sunday from 1980 but were moved to North Pine Country Park (now Petrie Town) in 1987 due to swelling visitor numbers; a market still popular today.

In the 1920s a school was built and named ‘Closeburn’ (‘burn’ being Scottish for ‘creek’) because a number of other schools in the state were already named Cedar Creek. In those days locals collected their mail from the train station and after complaints of their mail going astray, the train station and subsequently the area, were renamed Closeburn to avoid confusion. Residents wishing to travel by train to the city would leave their horses in a small paddock next to the local shop and if running late the shop-keep was kind enough to unsaddle their horse for the day.

Much of my research on the area came from the series of books ‘Samford Reminiscences’, stories collated from local families by the Samford District Historical Society. A few of these stories really took my fancy and were used as inspiration for my Cedar Creek artwork:

Faces in the rocks

If this isn’t called ‘Dog Rock’ it should be!

As for the creek itself, swimming parties and picnics were always a beloved pastime and Albert Eaton (of Eaton’s Crossing) made a portion of his land available to the public for a picnic ground. Visitors used to enjoy a ‘clear stream, busy with shoals of mullet, wild duck and water hens’ and the fresh water was ‘better than tank water to drink’. Children chased eels and catfish.

The waterfalls are located on the Upper Cedar Creek property once owned by Andy Williams and family. (These days the only recreational area devoted to the creek is ‘Andy Williams Park’ about half way up Cedar Creek Road.) The family had a kiosk to cater to tourists and a donation box to gain admission to the waterfalls.

Written information about the area is sparse during the late 20th century but I’m sure every local has a story to tell. In the early 2000s locals began to complain loudly about “people pollution” causing degradation from overuse, litter and lack of toilet facilities. Exotic weeds also began to pollute the water. Reports of vandalism, theft, trespassing and pollution were on the rise and a police crackdown occurred although there was only one arrest for cannabis and none for drink driving but it did successfully reduce ‘anti-social behaviour’ for a time.

The roadway to the Cedar Creek waterfalls is now private property so you’ll need to park nearby and rock-hop along the creek bed approximately 20 minutes to reach them.

The area is a charming place to visit. Along Cedar Creek Road you might see a cockatoo or kookaburra, goat or llama with platypus sightings in the creek a possibility. Keep your eyes peeled and you may even spot a gargoyle topped stone bridge! There are plenty of places to paddle in and Andy Williams Park is a prime spot for a picnic. If you’re looking to buy your own private haven close to town, property sizes are large enough to provide a rural atmosphere but small enough to prevent isolation with shops a mere ten minutes away.

The focus for this image was how visiting Cedar Creek makes you feel.

I dressed the model in formal dress to signify the popularity of community dances held in the Cedar Creek Hall. The dress is covered in flowers to portray the feeling of being revitalised and rejuvenated by spending time here. The woman’s dress blends with the waterfall to symbolise a connection or ‘oneness’ with the land as well as the flow on effect of visitors taking away feelings of nourishment to share within their own communities. I was also drawing on the stories of women washing their clothes in the creek by combining the water and fabric. The woman holds flowers as a tribute to Ivy Mitchell. I chose her reverent pose to portray how spending time in this beautiful, cavernous space is almost akin to worship, and to remember the original cedars that now live on in the form of churches. The flower texture over the rocks indicates the fertility of the region, both physically and spiritually.

I particularly like this quote about the region found in a newspaper article from 1929:

“If rosy-cheeked children are an indication of a healthy district then Cedar Creek, in addition to being unusually picturesque, must possess a very congenial climate.”

Learn how I created the feature image here.

I invite you to share your own stories, photos and experiences of Cedar Creek in the comments below so we can create a living history of this moving place for future generations.