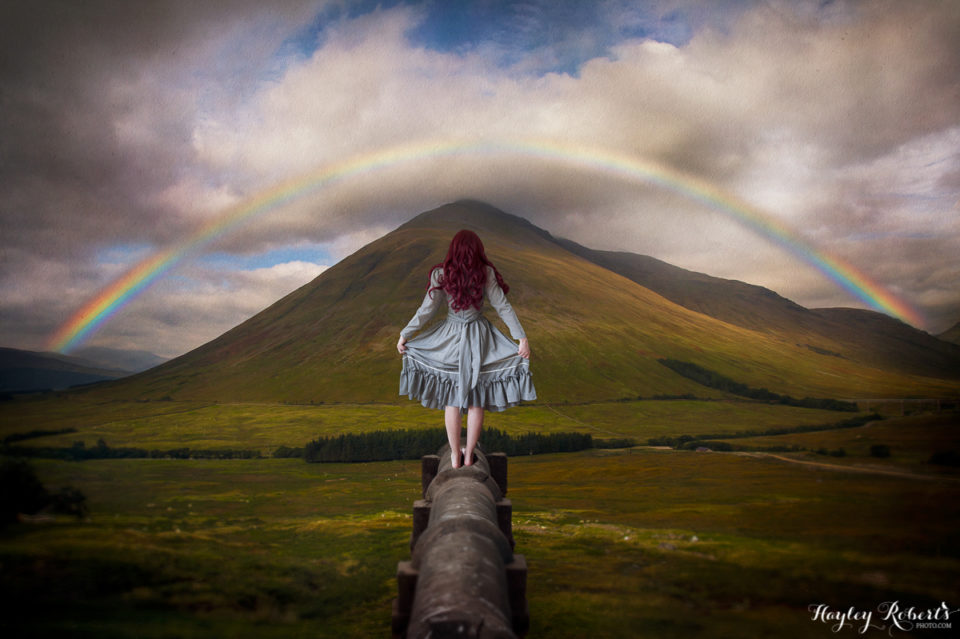 The making of ‘Enchanted’

Lately I’ve spent a lot of time staring at mountains and experiencing that feeling–you know the one–that is a mix of awe and wonder, interconnectedness and insignificance. There is no word for this feeling in the English language, or maybe any language, but it feels a lot like joy, or at least a kind of enchantment. When the clouds clear or the fog rises revealing a rainbow or a snow capped mountain and there you are to experience this rare and beautiful moment as woven by the elements, well, perhaps it would be an injustice to try and contain it in a single word.

I travel to find these moments and I photograph to try and immortalise them, but much like words, there is no medium on earth that can accurately convey the experience.

This is what my image ‘Enchanted’ came to be about but as usual it did not start out that way, and as usual it ended as an image of a character interacting with nature, as the majority of my photos do.

A lot of photographers who create the kind of art that I do have a very simple formula which is:

a) a basic setting that isn’t important to the story

b) a moody sky

d) something interesting happening to the character

e) an overall colour tone, desaturation and overlaying of a texture

My work has been getting too complicated and time consuming of late and arguably has suffered for it (or at least, I have) so I wanted to simplify things by creating an image using this formula. Without any plan I threw on a wig and a dress and posed for the camera, dancing, swishing, jumping and it was fun and freeing but probably not recommended because it’s difficult to come up with a concept after the fact. I chose the final pose because it was the most pleasing to the eye, but it was a challenge to work with because she’s observing, not interacting and that made it hard to put her in a story.

The mountains were photographed from a train in Scotland and have been on my mind as a potential scene for forever and a day. Because she’s observing I had to give her something interesting to observe and I liked how the mountains complemented the colour scheme of her hair and skin. The clouds are from the original mountain scene but combined from a number of different shots. It was at this point seeing the scene become the story that I ditched the formula and yet again indulged my subconscious desire to run off into nature.

She is standing on a stormwater drain mainly as a way of making her the correct perspective, but also, don’t you find you like to climb things to get a better view of pretty scenes?

I added the rainbow because I wanted to create one of those rare and beautiful moments I talked about earlier. An epic mountain is one thing but an epic mountain with a rainbow is exactly the kind of scene that makes you experience that exquisite feeling there is no word for, but feels a lot like joy.

FOOTNOTE: Two days after writing this post we had a stormy afternoon and with it came the closest, brightest double rainbow I’ve ever seen. As the neighbours came outside to view it it was a lovely to see so many people enchanted by the moment.