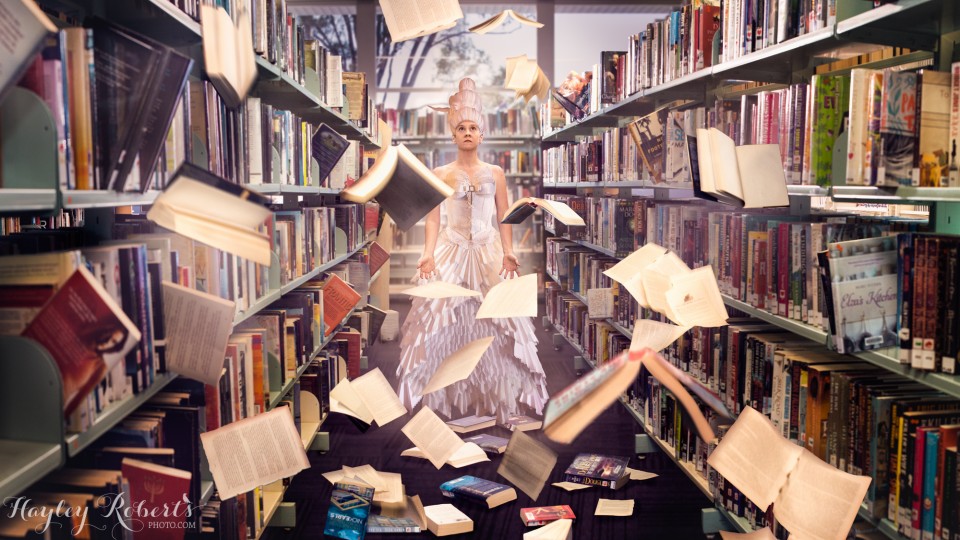 How to photograph floating objects.

Telekenesis seems to me to be the lazy person’s superpower of choice—which is probably why it’s my favourite. Inspired by Roald Dahl’s ‘Matilda’ I spent many hours as a child trying to make things move by the force of my mind alone but sadly gravity always won the battle.

Now, with the power of Photoshop and some trick photography I’ve become a master sorcerer, able to make objects fly at will, which is almost as good, right? Although it’s a tonne more work so it’s not exactly fitting for the lazy person’s lifestyle.

How to photograph floating objects

As you’ve probably guessed, making objects float is not so different from making a person levitate as covered in last week’s lesson. Again, there’s two methods—the first being to throw your object around, which is great for your non breakables like paper, but you have to get your throwing, your shutter speed and your camera click right to really capture the object at its best. Still, this way is pretty fun.

The second is to hold your object in the air and try not to obscure it too much with your fingers. When layered in Photoshop with an empty shot of your scene you can simply erase yourself out of the image and your object becomes suspended in mid air. For easy editing it’s important not to stand between your object and your background, but more to the side of it. Though if you do, you can just use your selection tools to accurately cut the object out and place it on your blank scene wherever you want it. I’ve used a combination of all of these methods in this week’s image.

What’s really great about this technique is that it combines both levitation AND multiplicity. You just photograph the same object several times, moving it all over your scene, so you can layer them together in Photoshop and make one object look like a hundred.

Here’s how to set up your camera. It’s almost exactly the same as previous weeks but it’s worth repeating because it’s so crucial for conceptual photographers to master this:

How to edit floating objects

With your images open as layers in Photoshop (and you may have many if you’ve been duplicating your object around the scene), make sure your background image is at the base of the stack. If you’re concerned about having that many images open in Photoshop at once you can open the images separately and just lasso the portion of the image you need (making sure you include something for reference that will help you match it up to the background) and then copy and paste that onto your document. I like to turn off the visibility of all my layers (click their eyeballs) except the background layer and work up my layers one by one. I add a white-filled mask to each layer and using a black brush I erase around my object, switching between a white and black brush if I erase too much (use x to toggle brushes). If you don’t like the position of a particular object, you can either select it accurately with a selection tool, then choose Select -> Inverse and delete everything else from that layer OR paint a very accurate mask around it and then, for both methods, use the move tool to drag it somewhere else in your scene. If you choose to do this, be sure to assess the direction of light and shadows in your image and make sure you place the image where the light and shadows are still convincing. Also make sure the perspective still looks correct. Even though you’re creating an image that wouldn’t be possible in reality you still want it to look realistic. This is the foundation of magic after all.

To get rid of areas where your body is obscuring the object, try using the clone tool. Choose the clone tool (or press ‘s’) then create a new layer making sure ‘Sample: Current & Below’ is selected in the tool’s options. Alt-click an area that you want to clone from and then start painting over the area you want to clone to. The clone tool is tricky at first so I’d suggest hitting YouTube for further information.

Once you’ve fine-tuned all your layers it’s important to think about shadows. While erasing yourself from the image you may’ve also erased the object’s natural shadow so if you can see that shadows are being cast in your image you will need to recreate these for believability.  I hope to talk about this more in future but for now the best thing to do is select a portion of the background that resembles the shape and location of your potential shadow and use a curves or levels adjustment layer to darken it. I tend to make it quite dark at first but then on the adjustment layer’s mask I erase the edges with a soft brush at a low opacity. Study the shadows in the room around you right now for inspiration as to how shadows look. They’re darkest closest to the object and then they fade and spread at the edges.

I work in a library and I wanted to create an image to illustrate the expectation that is placed on library workers to find the perfect book for a customer. If only I could go into the stacks and use magic to pluck precisely what they want. I stayed back one day after work to photograph 793.8 (lying to my colleagues about what I was up to). I used two Speedlites (one with a shoot through umbrella) that were placed in front of me and to the right hand side behind the shelves. The shooting process took about two hours and I was terrified the entire time that the cleaner would come in and bust me. The outfit is made entirely of paper and was photographed separately at a different location (Barwon Park Mansion during Brooke Shaden’s workshop) and knowing I wanted to use it in this photo I had to pose in a very particular way so that I knew I could cut out the dress and hat and make it fit my body. This is called compositing and it’s where Photoshop fun truly begins. To complicate matters I had to try and obscure the mannequin’s hands that originally covered parts of the dress. Sadly I think the dynamism of the pose suffers a little for these reasons.

In case none of this worked I also shot myself a second time in a completely different outfit that never ended up getting used.

After photographing my pose (twice) I then photographed some books scattered on the floor. Next I held up books to make them look like they’re flying. Then I tore up a book from an op shop and threw the same set of 5 pages around a number of times before photographing books moving and falling from the shelves. I expanded the frame by moving my camera right and left and finally I moved my camera to another section of the library and shot a different set of shelves to composite as a background behind my character. The edit was particularly hard because trying to stitch panorama shots of converging lines that have to line up EXACTLY was an almost impossible task. But thankfully I could use my flying books and paper to obscure the dodgy seams. Because I decided to use a different background in the final image I had to mask my objects exactly rather than using the cheat’s method described above, which was frustratingly time consuming.

Flying book (ignoring my own info and standing behind the object)

But it’s not every day you get to play the sorcerer’s apprentice while throwing stuff around at your workplace, wondering the whole time if those security cameras in the roof are actually being monitored by someone. Good times.