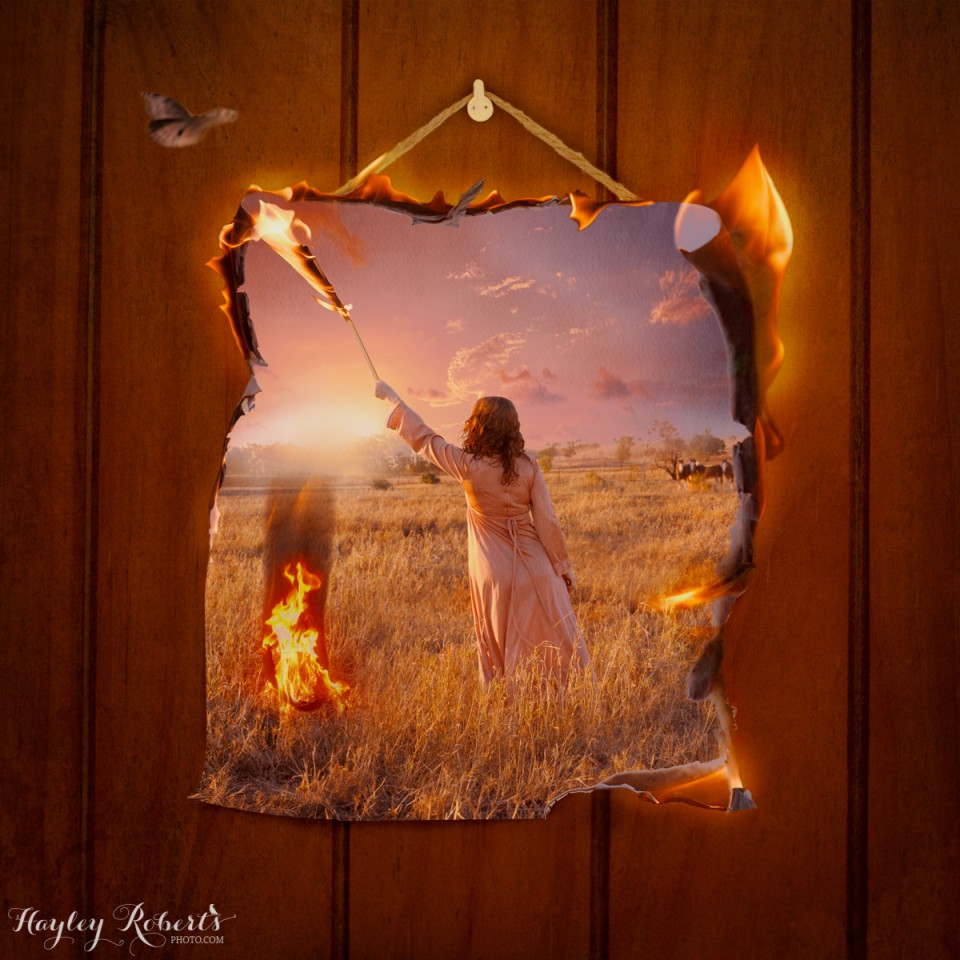 How to ‘break the fourth wall’ using Photoshop compositing.

‘Breaking the fourth wall’ is a more a concept than a technique and explains situations when a fictional character acknowledges that they aren’t real. In theatre or film this happens when a character directly addresses the audience. In works of art the character has to show in some way that they know they are part of a photo or painting. I brainstormed many, many ideas when coming up with this week’s photo and I’ll share some with you now so you know what I mean:

So to ‘break the fourth wall’ you either need to show your character reacting in some way to the medium they are a part of, or you have to make it obvious that they exist only as a 2-dimensional object by giving a glimpse of the ‘real’ world (the one the viewer exists in).

My favourite example of this technique is Brooke Shaden’s ‘Invading Homes’. I just love how she’s taken the concept that little bit further by giving the birds a shadow so you can see that they’re flying across a surface.

How to photograph a ‘fourth wall’ image

For my photo this week I photographed burning paper against a black piece of plastic using 1/320 sec, f/9.0 and ISO 1000.

The only photo of a moth I have

How to edit a ‘fourth wall’ image

Now it’s really just a matter of compositing your elements together. If you’ve decided to include an external scene, make it your bottom layer then add the main scene above it. Your element should be the top layer. Use the move <v> tool to drag each image into place. Using masks and your favourite selection tools remove all the parts of the ‘element’ image that you don’t wish to include. If you’ve photographed against white or black use the ‘screen’ blend mode to drop out the black or the ‘multiply’ blend mode to drop out the white. If that doesn’t completely work clip a levels or curves adjustment to the layer and modify the blacks and whites until the background disappears. When all your images are convincingly blended together, remember your principles of compositing and make them match in colour and contrast.

A little insider tip on blend modes: For my image this week I photographed a lit match against a black background to composite into my character’s hands. Because fire is tricky to select I had to do some creative masking. I made a copy of the match layer and on the first layer I masked out everything except the burnt black centre of the match. The other layer I set to the blend mode ‘screen’ to get rid of the black surrounding the outside of the flame. Using this method I entirely removed the black background but still kept the black areas of the image I wanted. I then grouped the two layers using Ctrl/Cmd g so I could move them around together.

Lastly you want elements such as a tear in the paper to look three dimensional so add depth by creating some shadows under the torn edges (or in my case add glow to the fire).

This technique is fantastic for helping to tell a story so if you’re stuck for ideas try brainstorming the fourth wall concept!

To create this week’s image I photographed myself just after sunrise at my cousin’s farm. I don’t normally like to work with sunlight but I wanted the soft orange light of sunrise to give a glow to the image and light my body where the match flame naturally would. The photo is an expansion of four images and was a pain to edit because it’s a really large file that tested my computer’s CPU. (My own stupid fault because I should have reduced the size of the stitched image before starting to edit it.) The sky was replaced with a more interesting one from a sunrise scene I shot at a beach in Noosa.

I worked with two poses, one where I was making a ‘shh’ motion at the camera and another where I was reaching up to light the corner. If you look at the main image you can spot my cousin’s Clydesdales on the right of the image and if you zoom in REAL close you can even see my dad in front of the horses taking photos. Hi Dad! With my mum’s kind assistance I shot the match and the burning paper outside my house with a bucket of water to hand.

I came up with the idea for this week’s image while on a long car journey to visit relatives. I thought my cousin Mary’s farm would be a great location for a girl setting fire to the world, but little did I know how much my cousin’s farm, as well as thousands of other Australian farms are suffering severely from drought and fire. When you live in a city and you hear about the plights of farmers I don’t think you can grasp how serious it is until you see it for yourself. I grappled with whether this image was in poor taste but considering how some farmers have been reduced to drastic actions to save their livelihoods, including killing off their animals because there’s nothing left to feed them, I thought it might help make a statement about the plight of our farmers. If you’d like to help Australian farmers please donate to the charity Aussie Helpers.