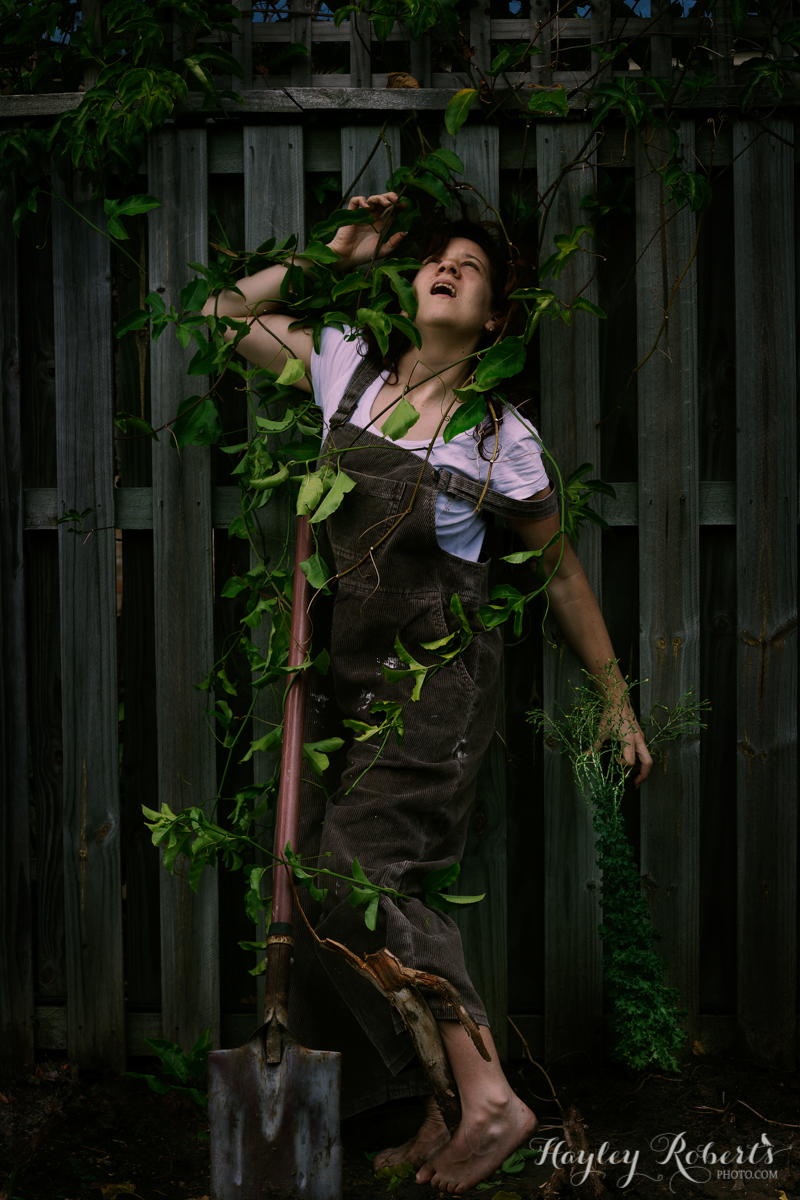 How to create a conceptual photograph.

Many photographers use their camera to capture a moment; they see an interesting subject so they shoot it to the best of their ability. But a worthwhile experiment for every budding photographer is to try staging a photo. Rather than passively waiting for all the elements to perfectly arrange themselves, take control and create the moment yourself. It’s an important lesson in thinking about concept, setting, composition, lighting and posing. It could be as simple as approaching someone interesting on the street and non-creepily asking permission to pose them in a certain way or as elaborate as the over-the-top concepts often seen in fashion or advertising. Make, rather than take. Create.

My chosen style of photography, conceptual fine art, uses photography to tell a story and so while the course of this blog will see me study and explore a photography technique each week, I also need to develop a story to incorporate that technique.

It’s a daunting prospect because concepting a shoot requires thought, creativity and the drive to pull together the elements needed to bring a story to life. But tackling these challenges can only improve your work. If you break your project down into its different components it becomes easier to manage.

‘Garden Attack’ is the very first conceptual photograph I ever took. I am proud of myself for attempting it even though I wouldn’t call it a success. But I thought it would make a good example to illustrate all the areas that need to be considered when creating a photo.

Firstly, you need to devise a concept and that’s going to involve tapping into your stream of inspiration. Not a creative person? Rubbish. You either haven’t found a way to express your creativity or you’re not yet seeing the world as an endless source of inspiration. I can’t close my eyes and come up with ideas. I need to surround myself with books and art, music and movies, and the work of other photographers. I particularly love to browse op shops for props to build a story around.  I take these influences and use my own life experiences to give them a new twist. Buy a notebook and jot down every idea, no matter how stupid. Use Pinterest or Evernote to create an inspiration library that you can turn to at any time for a little creative boost. And if you’re really struggling, try some inspiration exercises. Brooke Shaden outlines some particularly good ones here.

“You don’t make a photograph just with a camera. You bring to the act of photography all the pictures you have seen, the books you have read, the music you have heard, the people you have loved.”  – Ansel Adams

For ‘Garden Attack’ I came up with the idea purely because I liked the look of the passionfruit vines hanging over the fence and I thought about how a person might interact with them.

Once you have your idea, break it down into all its components. Here, you’re thinking about:

Story: this should primarily be guided by your idea, however if you’re simply shooting fashion or glamour it may not be especially relevant. For a conceptual photo, putting thought into your character will help get your story across clearly. Who are they? What is this situation they’re in and is it the most visually interesting part of their story? How did they get here? What happens after? Having answers to these questions will help you add extra elements that enrich the story.

I wanted my character to look as if she’d been digging a hole in the garden but nature had started fighting back. It’s not a complicated story and had I put more thought into it I might have had a stronger image, but I do like that it’s open to interpretation.

Setting: where and when is your story taking place? If your story takes place at a castle at sunrise then you’re either going to have to find a castle you can photograph at sunrise or recreate one using compositing. This is my biggest struggle. Either my concepts are too elaborate or the location I need is too public or dangerous. (With all the deadly creatures in Australia going off the beaten track is an extreme sport.) This means I have to think smaller, using the little pockets of trees and creeks that surround my home. My best tip is to assess your local area for its most unique features and include those in your photos. Use Google Maps to discover what’s nearby and then your car and your feet to explore further. Once I have built a portfolio I intend to approach more interesting locations for permission to shoot there.

As my initial idea came from the vines over my fence, it was easy for me to shoot in my garden and tangle myself in the vines without travelling too far or having passers-by staring at me. Both the time period and time of day are not important here, but I did want to darken the photo to suggest that the weather, too, had been angered.

Props: Having your subject interact with SOMETHING will make your shot more interesting and further your story. Being on an extreme budget I usually buy props from cheap “$2” shops, eBay or just use things I have lying around the house. Depending on your concept, you can even composite in a photo of the prop you want if it’s too difficult to get the physical version.

For my shoot I needed some gardening implements. I had a rusty shovel lying around and I replanted an overgrown lettuce to look as if it was grabbing at my hand. I used the vines to wrap around myself and dug a hole in the ground to make it look like I’d been doing something in the garden.

Wardrobe / Make up: What would your character likely be wearing? I have a clothes rack full of costumes specifically to be used in photoshoots. This is made up of clothes I don’t wear anymore, old costumes, and dresses from my *cough* goth days that are rich in dark colours and fabrics. I regularly scour eBay for vintage dresses (I never spend more than $30 unless it’s particularly special) and I visit every op shop I find. The clothes are cheap anyway but I like to go around change of season when I can usually pick up whole bags of clothes for $5 or less. For now, I wear basic make up I’ve applied myself.

As my character was working in the garden I figured she’d be wearing something old and ragged. I had a pair of paint splattered overalls that I thought would work perfectly. To make myself look dirty I smeared some mud on my white shirt and arms but unfortunately I did this fairly half-heartedly so you can’t really tell.

Subject: Who will play your character? What physical attributes do they need to have? If you have a willing family member or friend on hand – great! For me, mainly for ease of access, I primarily use myself but in the future I hope to either recruit friends or use models through ModelMayhem or online message boards. However, your subject needn’t be a person. An object or animal are perfectly fine too.

I never considered using anyone but myself, however the story would have been stronger had I used a model and wrapped them entirely in vines. As it was I had to wrap myself up, take the photo (my camera was too far away to register my remote so I had to pull myself out of the vines to trigger it and quickly wrap myself back up), run back to the camera to check my pose and keep doing this over and over until I was happy with the photos I had. I waited a few hours to get the diffuse light I wanted and jumped outside when it was just right. It would have been tricky having a model waiting around for that to happen.

Pose: It takes a little experimentation to get this right but the best way to start out with posing is to think about what pose will help tell your story. Should it be powerful or submissive?

I tried a number of poses for my concept, many of which didn’t work, including making it look as if my feet weren’t touching the ground and the vines had fully embraced me. My pose had to be tense and convey fear and struggle as I fought to escape the plants, but also partly submissive to make it look as if the vines were winning.

Lighting: Lighting is difficult and expensive, so it’s always best to start out with natural light, positioning your subject so it sculpts their features. Shoot early or late in the day and aim for overcast or cloudy days to avoid harsh shadows (unless that’s what you want). I’m just starting to dabble in the world of lighting, but you can start experimenting cheaply with lamps and candles.

I photographed mid-morning but waited until clouds crossed the sun so that my skin had a milky tone and everything was nicely lit from the diffuse sun.

I chose to shoot front on and in portrait orientation. I used a 50mm to get a close shot without distortion but I also moved my camera right and left to take extra shots of the garden to Photoshop in later (they didn’t make the final cut).

Once you’ve thought all this through do a rough sketch of your idea to help you visualise all the shots you’ll need to take and any elements you might use to strengthen your story.

Rough sketch for Garden Attack (my greatest talent is my ability to draw).

If your shot doesn’t work out don’t feel dejected because you’ll have learned a tonne of things from the experience. It’s frustrating to fail but get straight back out there and shoot it again using what you’ve learned. This is the only way to improve.

I initially considered my photo a flat-out failure because the “garden’s attack” was not how I envisioned and didn’t feel convincing enough. But I let it sit for a good 9 months before I took another look at it and with a little toning and colour correction in Photoshop I think it’s OK.

I love jumping on the Flickr pages of great photographers and scrolling back to their first photos to see how far they’ve come. And I’d love to see yours too. Have you tried taking a staged shot? Show me your first attempt!