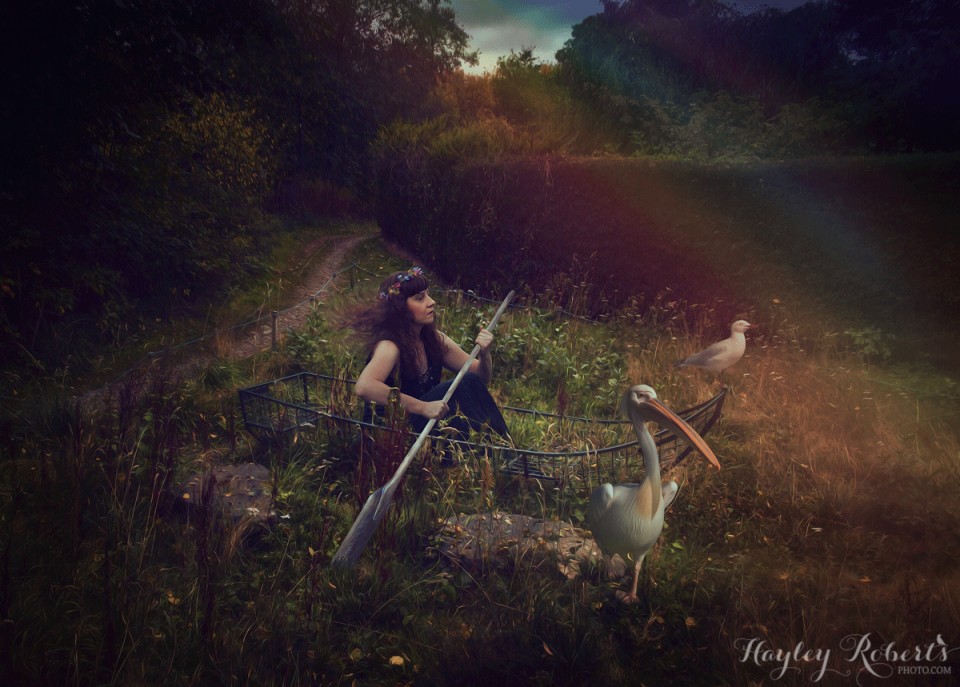 The word compositing has a boring textbook definition that in a nutshell means “how the magic happens”. Compositing made it possible for Harry Potter to fly around a Quidditch pitch, for Spider-Man to swing between buildings, and for men to walk on the moon. (Just kidding.) (Or am I?)

Admittedly compositing TERRIFIES me, not only because it offers unlimited possibilities—the indecisive person’s worst nightmare—but also because there’s a lot to get right for a composite to look real. I’ve done compositing in previous tutorials but in most cases all the components were shot in the same location with the same lighting and camera position so the chances that something wouldn’t fit were low. The stakes are much higher when you’re trying to piece together images from entirely different situations.

How to photograph for a composite

To work through the process of compositing I’m going to use the image I created this week, ‘Dream’s Quest’ as an example. It wasn’t until I finished the piece that I realised it vaguely resembled the painting ‘The Lady of Shalott’.

The Lady of Shalott

The first thing you need to do when creating a composite is to choose / take the photo that you want all your other elements to match. I have hundreds of photos of locations that I’ve photographed over the years specifically for the purpose of one day compositing a person into because it’s rarely practical to have the costumes, equipment and time needed to create a conceptual image whenever you see a pretty scene. This base photo becomes the one you have the least control over because it’s probably too difficult or costly to go back and shoot it again. So you need to assess this photo so you can make all your other elements match.

For Dream’s Quest my base image was a photograph of a lovely painterly garden I took in Pitlochry in Scotland. I wanted to ease into compositing with the simple aim of shooting myself separately and making myself fit into the garden scene.

When shooting your composite components you’ll need to consider the following:

Because my base image was an overgrown garden I shot myself sitting in grass in my backyard so the foliage and the colour would match between scenes. Had I not been wearing a green dress, shooting on green would also have made it easy to select myself out of my background by using Select->Color Range, selecting the greens and them adding a layer mask that hides the selection.

My background image was shot on a very overcast day close to dusk so I made sure to also photograph myself on a cloudy day. I noticed the light in my backyard was bluer than my base image so I changed my camera’s white balance to make it warmer although I could also have achieved this in Photoshop. The two birds were photographed on sunnier days and I couldn’t quite get them dark enough in Photoshop to fit my scene so I decided to paint in some motivated light on the right of the image to make their lighting look realistic.

I don’t know what height I shot my garden image from (which is why it’s handy to use a tape measure when shooting for composites) but I made a fairly safe assumption that it was from eye height. So I set my tripod to eye height to match. Because the boat was the feature of my original image I also guessed that I’d angled the camera down slightly, so I did the same with my tripod. The boat was lower than camera height and was positioned facing slightly towards camera so I sat on the ground and angled my body to match.

I didn’t have an oar, however I remembered I’d shot one while staying at a friend’s house so I played around with that oar photo to see if I could make it fit. When I posed myself I held a rake as a stand in for the oar so that my hands realistically looked like they were holding something. I also had to be mindful to pose my hands so they’d roughly cover the original hands in the oar photo.

This one scared me a bit because I wasn’t shooting with the same camera or lens. The original scene was shot at 15mm on a cropped frame while I shot myself at 50mm on a full frame. I tried to position myself in the same rough area as the boat so that the area of contact between my body and the new ground would meet (although weeds ended up covering this spot anyway). You can always paint in shadows or place something over the area of contact to stop your person look as if they’re floating. I had some trouble resizing myself accurately which is where replication of distance would’ve come in handy.

I shot my original scene at 1/200, f/5.6 so I made sure to shoot myself with the same settings. Because I’d focused on the boat originally I knew that if I sat in the boat then I should shoot myself in focus also. It’s best to shoot all your components as sharp as possible because it’s easy to blur things in Photoshop. Much harder to make something sharp.

I always shoot RAW which avoids these issues but if you’re working with a purchased stock image it might be lower quality. So while it’s not ideal you could always add noise to the RAW image to make the two match.

If you’re worried your composite won’t work you can try doing a test shoot and a rough composite first to see if there’s anything to it. Learn to make peace with the fact that sometimes you’ll need to shoot your components more than once to get them to fit. As frustrating as this may seem it’s all part of the learning process.

How to edit a composite

Once you’ve shot all your elements you’ll need to cut them out so they fit into your scene. Which selection tool you use for this task is personal choice. They’re either wildly inaccurate or time consuming so I personally use either hand painted masks or the pen tool. Obviously the more accurate your masks are, the more convincing your end product will be so don’t take shortcuts here. Also remember to feather your selections a little using the ‘Refine Edge’ or ‘Refine Mask’ commands so your cut out pieces don’t look too sharp.

In Photoshop I placed the girl layer underneath the garden layer and then masked out the garden to see through to the girl below. It didn’t occur to me when I was creating this composite how difficult it was going to be masking through all the flowers, plants and the structure of the boat to see through to the girl so I zoomed in as close as I could get and painted a black mask on my background image using a square brush. Seriously guys, using a square brush for fine masking has CHANGED MY LIFE. Pixels are square so why use a round brush!

Now THE most important thing in making your components match is to assess their saturation, colour and contrast. You don’t want one element too bright or too green because they’re going to stand out so use clipped adjustment layers to get each element to match. For this I use Phlearn’s fantastic ‘Checks’ method which is available as an action when you purchase a Phlearn Pro compositing tutorial and is a handy tool if you’re serious about compositing.

Before colour, saturation and brightness/contrast corrections

When you’ve cut out your subjects and placed them on their new background you need to think about how to make them look like they belong there instead of just slapped on. There are a few ways to do this:

For my image I was lucky that the contact point between myself and the ground was hidden by weeds so I didn’t have do any work here. It was also very soft diffuse light so shadows would be unlikely. However, I did draw some grass in front of the pelican’s feet and the oar to make them fit.

I added a little blur to the front left of my image and some to the sky so the busy plants weren’t so distracting.

My scene already had its own depth with the path and the hedge but as mentioned above I did use weeds and grass from the background to cover parts of my subjects.

When you’re done there’s a couple of other tricks that will help sell your composite. First, add a little of the same colour to your entire image to tie the pieces together. I like to add a Selective Colour adjustment layer to the top of the layer stack and play around with the colours. Also try adding a small amount of overall noise with a noise filter or a texture as discussed previously to give your components a common element.

So yes, compositing is one scary beast! But after dipping my toe into the waters this week I discovered that it’s not nearly as frightening or exact as I thought it would be. And considering compositing makes ANYTHING possible then it’s surely worth the work to get it right.