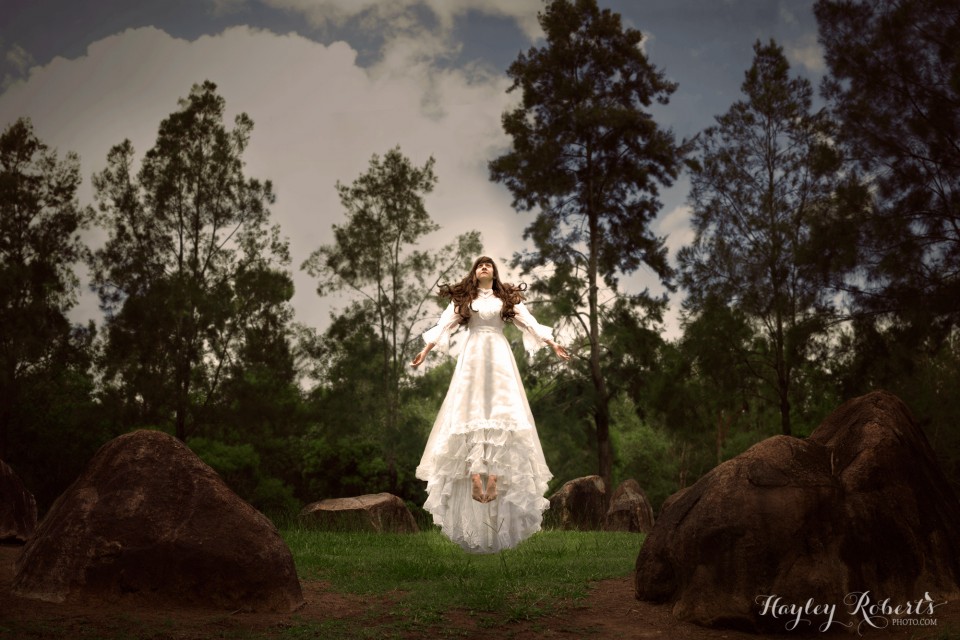 How to do levitation photography.

I was up in the air about how to start this blog post but then I realised that’s a terrible joke and decided to get on with it. The easiest and most effective trick you can do with photography and a touch of Photoshop magic is to make someone levitate, float or fly. Photos that defy gravity are both graceful and clever and look much harder to create than they actually are. My favourite levitation photograper is Natsumi Hayashi whose work is so simple, yet so unique and inspired.

How to take a levitation photograph

There’s two ways to try levitation photography – one requires Photoshop and the other does not. To make the kind of levitation image popularised by Natsumi Hayashi you simply need to photograph someone jumping. Selecting a high shutter speed of 1/500 or faster to freeze motion is preferable for that hovering appearance. This method gives built-in hair movement but all that jumping in awkward poses can be fairly exhausting on the body while trying to get it right.

The second method involves taking two photos and combining them in Photoshop. The first photo should be of your model perched on something, while the second photo should be the blank scene with the model and stand removed. Then all you need do is layer them together in Photoshop and mask (erase) the chair/table out of the scene so the blank background shows through.

To recap on lessons in previous weeks, here’s how to set up your camera:

How to make levitation look convincing

After: subject is too low and the levitation isn’t so effective

You can see which looks more realistic

Use cloning to fix translucent material

My image, The Rise, was taken on an overcast day down the end of my street where there’s a stone circle. Stone circles are steeped in mythology so I thought it would be a great place to make someone levitate. I’d also recently watched Picnic at Hanging Rock and having tracked down a wedding dress reminiscent of that fashion (thanks eBay) I thought it would be a great outfit for the location. I photographed myself posing on a tall stool then I shot some hair flicks. Next I shot my pointed feet separately to fix the problem of ‘flatness’ I mentioned earlier, then I took off the dress and held it up from the same height as I was standing. I did this because, since the back of the dress is so long, I knew parts of it were being obscured by the stool I was standing on, which would cause problems later when I went to Photoshop out the stool. I then took my blank shot and expanded my frame by taking shots all around. Making an initial sketch of all this was vital so I could see the areas I’d need to problem solve.

Back of the dress

How to edit a levitation photo

Open your chosen images as layers into a Photoshop document making sure your blank layer is your bottom layer. Add a white-filled layer mask to your subject layer and, making sure the mask is selected, use a soft black brush to erase the stand from the photo, revealing the blank layer below. If you mess up and erase too much, switch to a white brush (x) to paint areas back in. You’ll find yourself toggling between adding and erasing a lot. Click here for more information about masking.

If you can view some of your stand through areas of translucent fabric try using a lower opacity brush to paint on these areas, or the clone stamp tool to remove the section entirely. If you’ve shot extra photos of hair, fabric and limbs for compositing you’ll need to either have some knowledge of selection tools to cut them out precisely (hair is it’s own particular beast) but if you’ve shot them on the same background you should be easily able to mask them in and have them line up without trouble. Make sure that when you are painting along edges that you switch to a brush with a hardness that matches the natural lines in the photo and be extra careful with your masking.

To add realism to your levitation you can add a shadow under your subject. I’ll talk about shadows more in future but just briefly you do this by first assessing the direction of light in your photo. Then create a new layer and using a soft black-filled brush paint a shadow under your subject roughly matching your subject’s shape in the area where their shadow would naturally fall. Shadows are darkest and sharpest where they are closest to the subject so you may need to create different layers of shadowing of varying darkness and hardness or change the opacity and hardness of your brush as you paint.

My image was a little tricky. The feet had to be cut out exactly and the back of the dress made to fit the main dress image. The hardest part was my hair. I got it to flick nicely on the left hand side but for some reason, not the left. I also shot some of the hair flicks while I was wearing a different dress so the background was different. To fix this I had to use areas of hair from the left and flip them to the right so they fit. I then had to erase bits of the background using a mix of cloning and lower opacity. It’s still not perfect but you can sometimes get away without being exact.

Added the back of the dress

And that’s it! Abracadabra. Up and away!