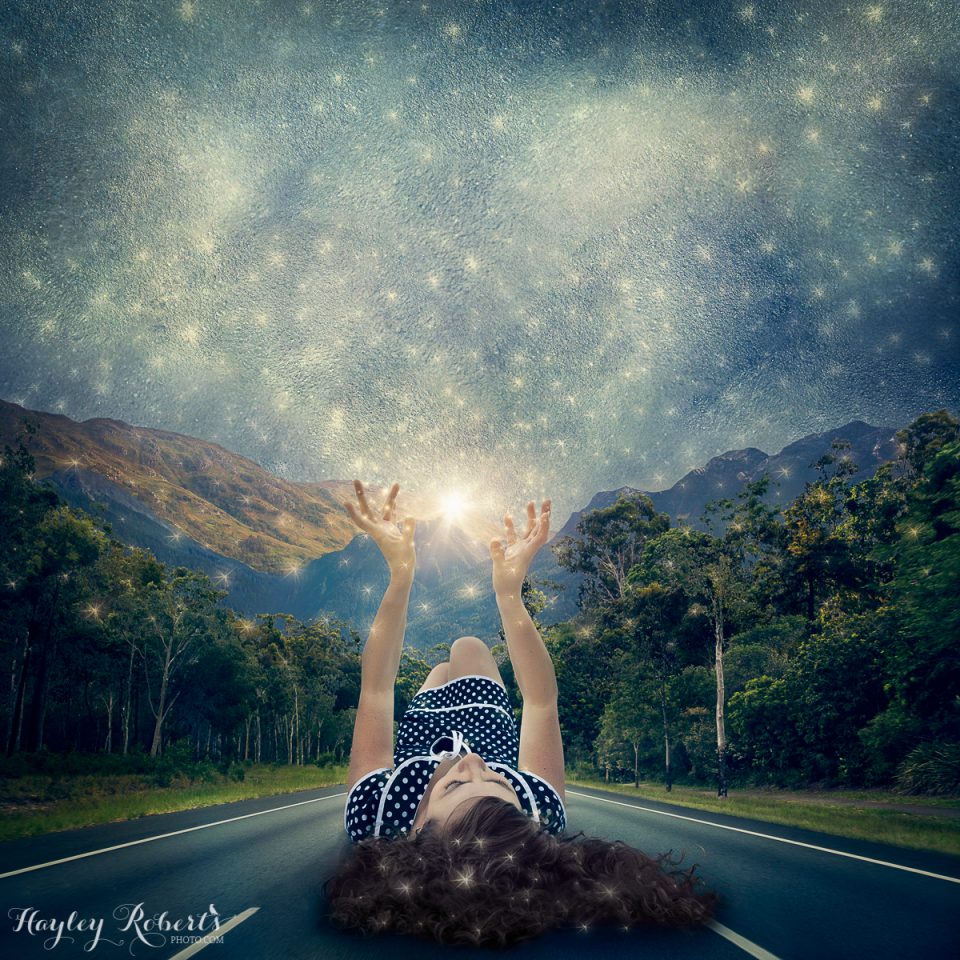 The making of ‘Luminary’

SIGN UP to my brand new newsletter featuring latest news and images and exclusive access to flash sales! Enter your email in the box at the top to stay in touch.

To get between work and home I regularly drive a busy highway and as those who drive highways know, the traffic can often stop for reasons unknown. During one of these particular ‘jams I was daydreaming about what could be the cause of the trouble ahead and I started imagining an oversized girl lying on the road. This is going to sound really weird, but when I was young I used to have recurring nightmares where I would forget the size of things; so big things would become small and small, big, and I’d get upset because I couldn’t remember the ‘right’ size of things. Because of this I think about wrongly sized things probably more than is normal. If any shrinks care to weigh in on what this might mean I’d be interested to hear just how crazy I am.

I was quite taken with the idea of this gigantic girl so to create the image I literally took to the streets, photographing all kinds of roads, but being an annoying perfectionist I couldn’t find any that matched the vision in my head. So eventually I coaxed Mum into driving me up and down (and up and down) the highway while I took photos of the road. I love the random and weird experiences I have when creating images.

I shot the self-portrait twice because the angle wasn’t right. The second time was on a windy day and the backdrop kept falling over and smacking me in the stomach (so maybe not all the weird experiences are fun). I think the official term for this is “suffering for your art”. Especially since I never ended up using those second shoot images anyway.

The roadside trees were also photographed on my highway drive but as we were moving they are slightly blurred and were really hard to cut out, so I ended up layering many trees from different photos behind them to disguise the masking issues and give the image depth.

The mountains are created from different European scenes, while the sky and stars are overlays I purchased from Jessica Drossin.

Now, to that all important meaning behind the photo … I am obsessed with the stars and have been known to wish on a star or two (hundred) in my time. Some years ago I even started writing a novel about a man whose wishes on stars started coming true (which was also titled ‘The Luminaries’). But I eventually learned that the only person in charge of your destiny is you. If you want something to happen only you can take the steps to make it so. Perhaps the stars can align for you but you’ve got to already be pursuing your dreams to be able to seize the opportunity. So for this image I wanted it to be ambiguous – is she the kind of person who catches stars or the kind of person who creates them? (I‘ll leave the mystery of her largeness up to you.)

And a quote I love featured in a photo posted recently by Damien Echols.