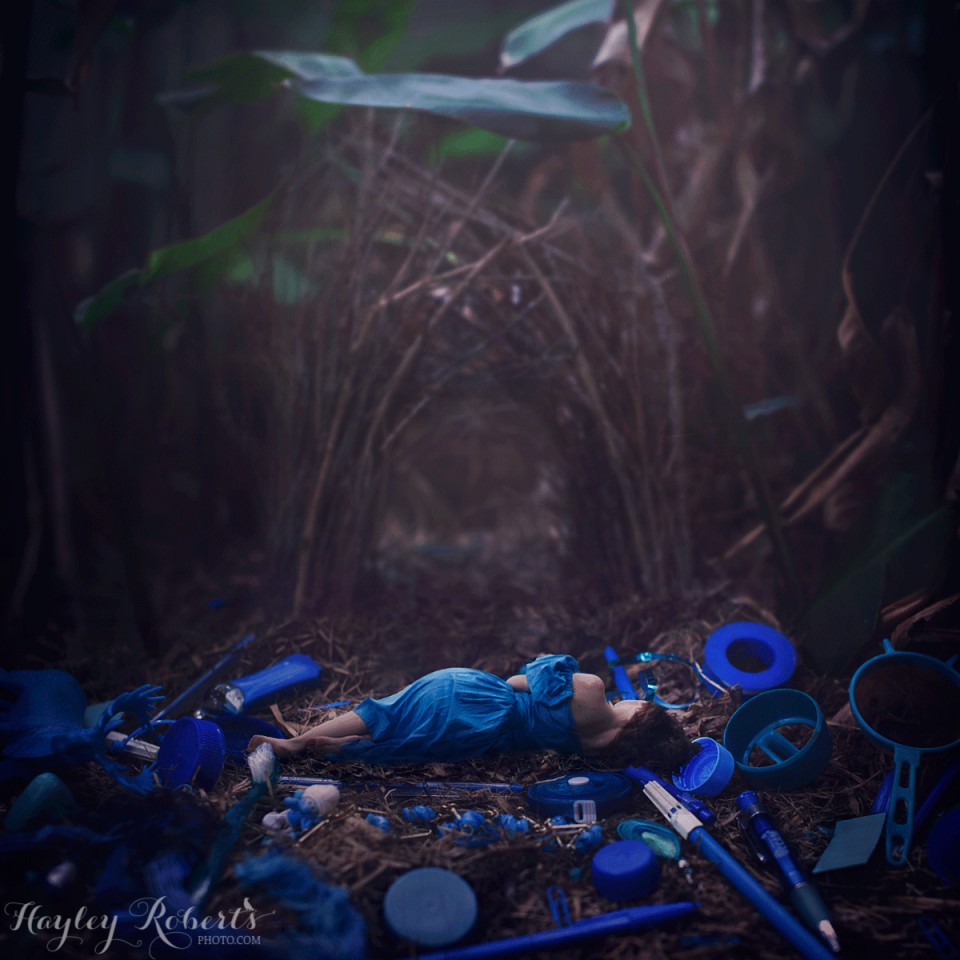 How to photograph and edit a miniature person.

A little known fact about me is that I’m a bit obsessed with miniatures. There’s just something about dioramas, terrariums and the work of artists like Thomas Doyle, Slinkachu, and Lori Nix that thrill me beyond explanation. Because of this I went through a fun phase of photographing Smurfs and other toys around my house. But now with the help of compositing I can use myself instead of figurines to insert into small scenes, instantly turning everyday objects into magical worlds. There’s not a single object that doesn’t become significantly more interesting by the addition of a tiny person interacting with it.

For example, I am staring at a water bottle. If I put a small person in that scene I could show them jumping to try and reach the lid, I could place it on its side and have a person drinking or bathing in the spill of water, I could have someone trapped inside the bottle. Instantly, one of the most dull objects in the world becomes something fascinating. It’s a really fun exercise and I encourage you to give it a go. Even the least creative people would be hard-pressed not to come up with SOMETHING.

Tips for photographing a miniature

At its simplest a miniature is created out of two photos – one of your small scene and one of your person. The biggest problem you’re likely to face is that of depth of field. When you shoot a small object up really close your focus area becomes quite narrow. To get that same narrow focus on a full sized person you need to shoot with a very small aperture, say 1.8, which isn’t always available on inexpensive lenses. (Except the nifty fifty which should be in every photographer’s bag.)

This is the most common error you see in miniature photos— when the person is way too sharp for the scene—and even the best photographers sometimes get this wrong. It’s a fine line because you want your subject in sharp focus to draw the eye to them but you also want your subject to look like they belong in the scene or the realism falls apart.

So there’s two ways to get around this:

The first is to shoot your small scene with a narrow aperture to get as much focus as you can, so f/16 for example. Then shoot your subject with a wide aperture of say f/5.6 so their eyes are in focus but their edges are a little blurry, but it’s a guessing game to get these settings right.

The second method, which I prefer because it doesn’t need to be so exact, is to shoot both photos as in focus as you can and then use blur filters in Photoshop to selectively create your own depth of field. When adding your Photoshop blur, zoom right in close to the image because it’s much easier to see how blurry something is up close, then match the blur between your two images accordingly. Always get a second opinion on whether your person fits in the scene before you release the image to the world because your work starts to lose context when you’ve stared at it too long.

How to photograph a miniature

Start by setting up your scene. I say “setting up” because miniature scenes are rarely ready to be photographed as is. You may need to dust your items, or move your items to a new background to avoid distracting elements, or position your item where it’s getting a nice spray of window light, and then you’ll want to add all the little touches that make your scene interesting and help sell your story.

I couldn’t use a telephoto this time because my scene (bottom left) was too close to a wall.

A macro lens isn’t necessary but if your scene is quite tiny it would certainly help you get in close enough. If space allows I like to use a telephoto lens positioned far back from the scene but zoomed right in close because this gives good focus where I want it and a nice blurry background to remove distractions.

Find your focus. You can’t exactly have someone stand in the scene for you while you find focus so put something in your scene to focus on. A small human shaped toy is ideal because it helps later to find the right sizing for your person and also because the shadow it casts can possibly be used in the final image, but do remember to remove the toy from the scene once you’ve found and locked your focus so you can take your main blank shot.

My scene – I just focused on the ground where I knew the girl would go.

When you’re happy with the scene you’ll need to shoot your person. To preserve your sanity my suggestion is to try and shoot them in the same area so the light matches and you won’t have to do a tonne of work in post to make them fit. You’ll also need to shoot them from a similar angle. If you shot your scene from above you’ll need to shoot your person from above. When starting out I’d advise shooting both your person and your scene directly on. For this week’s image I shot my scene very low to the ground but still slightly above where my subject would be so I also shot the image of myself close to the ground but slightly above (although in retrospect I didn’t get high enough). To keep things easy for yourself have your subject pose in a way that is mainly flat to the camera. For my image this week I had myself laying straight and parallel to camera so I knew my whole body would be in focus. Had I laid with my head close to camera and my feet far away then I would have had some real issues with focus.

Be mindful of where your subject is positioned to avoid any colour casts. For example, the ground of my scene was primarily brown rocks and mulch. I couldn’t fit myself into that same space to shoot the subject image so I had to shoot myself lying on grass nearby. I knew that grass would not only give my skin a green colour cast but that parts of it would obscure my body and since there’s no grass in my scene these would need to be removed. To avoid unnecessary work I instead lay on a brown coloured towel so the colours would match. This sort of forethought is so important when creating composited images to save headaches later.

If the subject will be interacting with an object in the miniature try and recreate this in the full size scene, for example, if I want my person leaning against that water bottle then have them lean against a bookcase or a wall.

How to edit a miniature

Open your chosen scene image in Photoshop. I’d then recommend opening your subject image and converting it to a smart object by right clicking on your layer and choosing ‘Convert to Smart Object’. Photoshop discards pixels from an image when you shrink it in size so that if you decide you want to make it bigger again you will have lost detail and resolution. Because you’ll probably be resizing your subject layer a lot to get them to fit your background you want to do this non-destructively. Smart objects allow you to resize as much as you want without losing quality.

Add a mask to your subject layer which should be placed above your background layer. Create a rough mask at first by using a black brush on the mask to paint around your subject. This way you can see if the pose is working and play around with the sizing without going to too much trouble. When you’re happy, fine tune your mask using whatever selection tool you desire. Although it’s not the quickest or easiest method, the most accurate way for me is to zoom in really close and paint black carefully around the subject’s edges, switching to a white brush to add pieces back in if I make a mistake. If you’re new to my blog I cover masking in more detail in previous tutorials.

Assess your scene image to see what shadows are being created and how they are falling. If you shot a version of the scene with a human shaped toy, add that image to the layer stack (above the background but below your subject) and mask in the toy’s shadow. Otherwise you’ll need to create the shadows yourself.

I’ve touched on how to create shadows before but they’re really, really hard to get right and I am definitely no expert so I’d highly recommend spending a little time with Mr Phlearn and probably every other shadow tutorial you can get your hands on.To avoid shadows altogether as I like to do, shoot your scene and your subject in very diffuse lighting so there’s little to no shadow although you should still darken the ground and the subject where they are touching.

The method I use to add blur to my subject layer to make it match the background’s DOF (or vice versa) is to duplicate the layer (Ctrl/Cmd J), go to Filter>Blur>Gaussian Blur and, while zoomed in, move the blur slider until the subject’s sharpness resembles that of the background. Then I add a layer mask to the blurred layer and use a soft brush to remove it from the areas I want kept sharp.

About ‘The Wrong Dress’

I’ve always been fascinated with Bowerbirds and in particular the Satin Bowerbird which collects blue objects to surround their bower. Having never seen one in person I researched pictures on the Internet and created my own bower using sticks collected from my backyard, stuck into polystyrene and surrounded with mulch, and even with opposable thumbs it’s still nowhere near as good as the beak created version. I then had great fun collecting blue objects from around the house. Those with a keen eye will spot a smurf amongst the collection. The ridiculous irony in this is that a week later I was holidaying at Binna Burra in Lamington National Park and actually got to see a REAL bowerbird bower. Oh life, you’re so hilarious.

A real bower with a poor blue collection.

The scene is a two shot expansion stitched together. I’ve had a terrible time making the girl fit and only just now realised that it’s because she’s too flat so I need to warp her midsection so it sits lower. However because I’ve done so much work to the image I’d practically have to start again to fix it. It’s a good lesson that not every image will work so don’t feel too blue about it (badum tish).

The wonderful thing about compositing is that you’re no longer limited by size so, not only can you make people small, you can also turn water features into waterfalls and rocks into mountains so don’t forget to utilise this handy trick in your future work.