How I created ‘Sweeney Reserve’

How I created ‘Sweeney Reserve’

Throughout the history of Moreton Bay there is one person who shines more than most, and that is Thomas Petrie. I read all I could about his life but I couldn’t find the right story to portray for this project, mainly because he was so heavily involved with the Aboriginal communities and I’m unable to tell their stories without specific consent. Instead I went searching for locations that were important to him which still exist in a natural form today and that’s when I found Sweeney Reserve and was immediately taken by its incredible trees. When I learned that it was once THE weekend destination for Brisbane residents I knew I had to include it in ‘The Land and I’ project which you can see at the ‘Stories of Sweeney Reserve’ page.

I decided that I wanted to photograph a picnic scene as a throwback to the time when it was a popular picnic destination, by including as many picnic baskets as possible, but with no one around, to show the transience of recreational spaces. I studied what picnics looked like during the 1920s and set about collecting as many picnic baskets as I could from op shops and friends, as well as sheets, historical looking hats and crockery. It was a costly process.

This image was my problem child and I ended up shooting it EIGHT TIMES.

The first was to test what angle I should shoot it from. 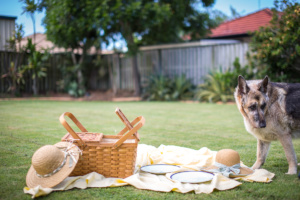 My darling Koda, may she RIP.

The second was to test if I’d have enough baskets. 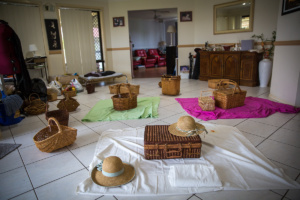 The third was in my backyard to see how it would all look.

Say hi to Fudge who we were dog-sitting.

The fourth was to test various spots at Sweeney Reserve to find the right location. 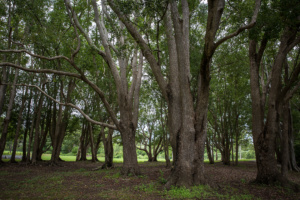 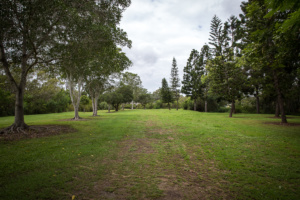 The fifth was to shoot my chosen location thinking I could then photograph the picnic baskets at home and composite them together. But I decided during this shoot I’d need to photograph everything in the one place. 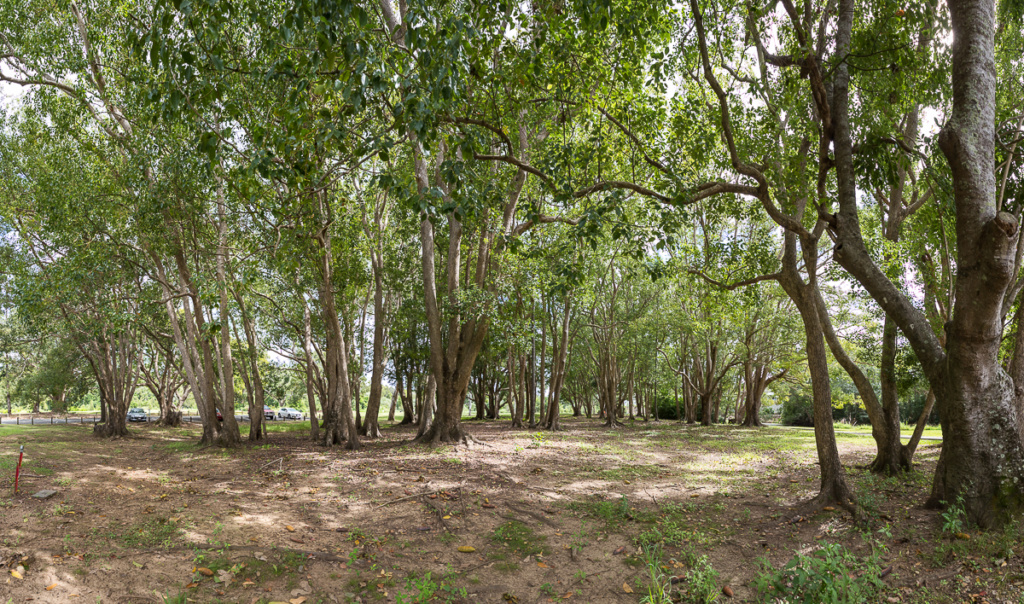 The sixth was on Anzac Day. I spent the evening before buying picnic food. I watched the overcast weather all morning and when I decided there was the perfect amount of cloud cover to diffuse the light my Mum and I drove to Sweeney Reserve to set up. Immediately the sun came out and refused to go away again. We set everything up and then I realised I’d left the food at home and had to go back and get it, leaving Mum stranded with a sea of picnic baskets for 40 minutes. We set up the food and waited and waited for the sun to go away. We were stared at A LOT. Despite all this, when I got home I decided the images were too busy and I’d need to shoot it again. 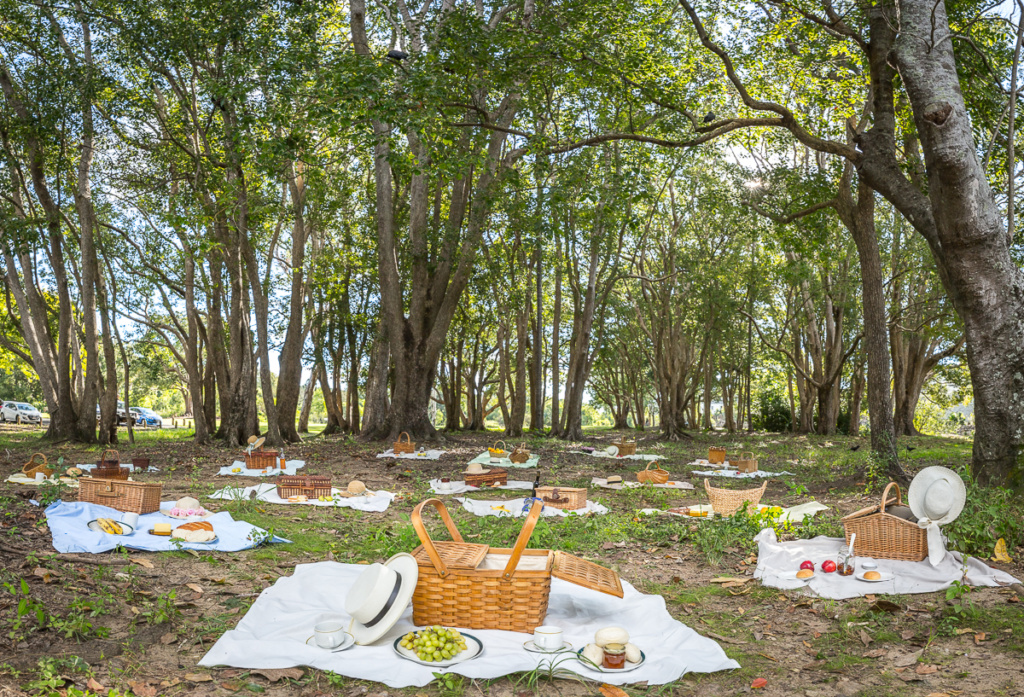 The seventh was in my backyard. I changed the shooting angle. Recreated the basket setting from my first image and waited patiently for the sun to dip behind the clouds. I decided to simplify the scene by using no food.

The eighth was during pouring rain when I had to go back to Sweeney’s and find a less busy scene. I sat in the car and waited for the rain to stop and then ducked out and shot panoramas of my chosen areas as quickly as I could.

Then I spent weeks combining the baskets from the seventh shoot and the scene from the eighth into one final image. I was amused by these flying carpets as I added in extra baskets at the back.

The process was a pain as I had to cut out each picnic basket individually, replace the grass underneath which I cobbled together from many different shots, and then painted in shadows under each setting. I added the emu and kangaroo from different zoo photos and the rainbow was created within Photoshop. I spent even more weeks massaging the colour and then at the last minute decided to fade the edges to black and white to give it a historical aspect. 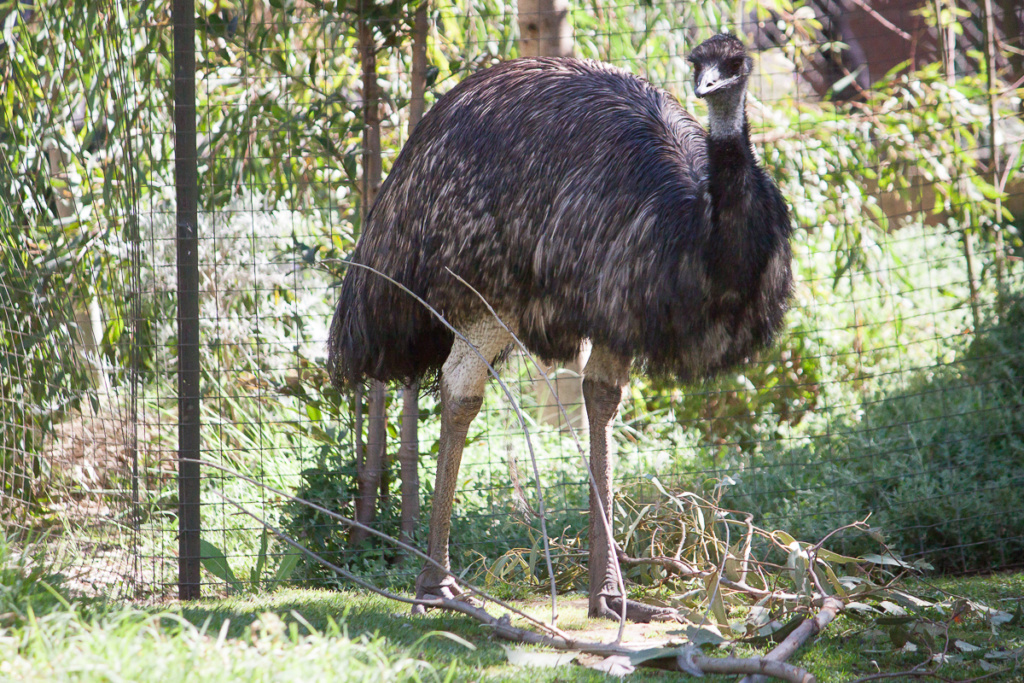 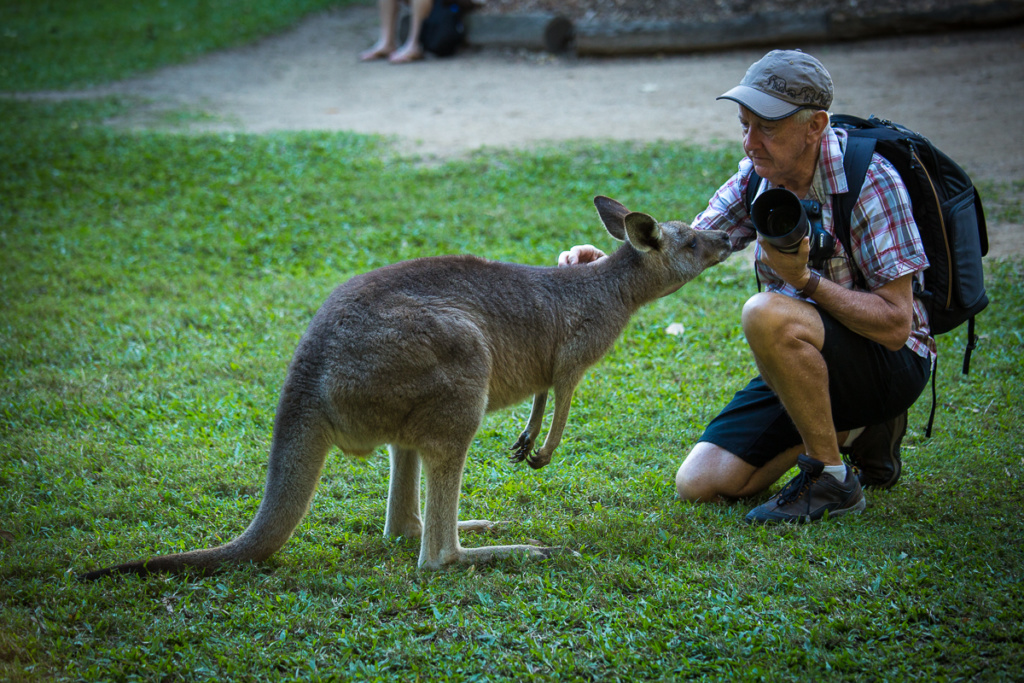 As you can imagine I am really glad this one is over.