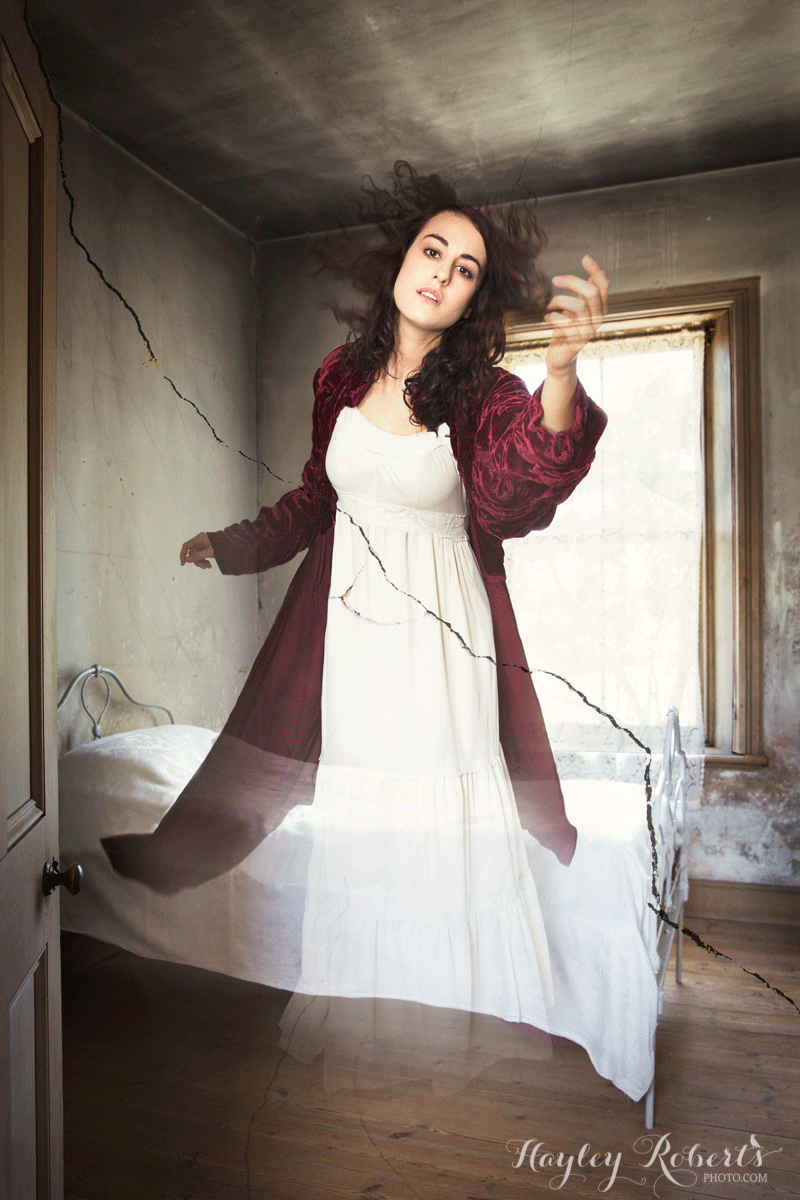 How to use opacity to create a ghost.

Late last year I had a series of odd encounters with rabbits. It all started when I accidentally wore an angora scarf (I don’t support fur as fashion), which lead to a number of rabbit sightings (even though they’re considered a pest and banned in my state) and culminated in a trip to Victoria for a workshop at the home of the man who introduced rabbits to Australia (while staying in an Alice in Wonderland themed hotel.) I seemed to have unintentionally been following the white rabbit and it had lead me to a Brooke Shaden photography workshop held at Barwon Park Mansion.

Brooke is the queen of conceptual fine art photography and the delightful lady who inspired me to pursue this field of photography so it seemed apt that the rabbit would lead me to a crumbling old mansion to meet the person who’d sent me on my own journey down a rabbit hole.

As part of the workshop, participants had the chance to photograph three models for 10 minutes each in different areas of the house, including the main house, the stables and the servant’s quarters. The house was full of cracks and crannies, textures, muted tones and the most wonderful natural light but despite all that it’s incredibly tough to conceive an idea, set up your gear, dress and pose a model and photograph them in such a small time slot. Before I knew it I was back home with a memory card full of “ghosts”—levitating girls and spooky expressions.

Barwon Park Mansion isn’t particularly renowned for its supernatural visitors, although it does have the occasional ghost tour, and there was that one time when a photo of a Barwon ghost went viral, only to be later proven a hoax. But I guess there’s just something about wandering through an old unoccupied stately mansion that got into my psyche. It certainly didn’t help that there was an exhibition on at the time entitled “Love, Desire & Riches: Fashion of Weddings” so there were empty dresses and floating veils on display as well as a Miss Havisham style spider-web covered wedding cake; just what every girl needs.

How to photograph a ghost

There’s two main ways to shoot a ghost photo. The first involves using a long exposure and a fast moving model, but this can be a bit hit and miss so I’m saving that method for a future tutorial on long exposures. The second way is to use two or more exposures combined in Photoshop, which is the easiest way and is the method I’ll cover today.

Building on the techniques I’ve covered in previous weeks, the quickest and most effective way to shoot a ghost photo is to lock your camera’s focus, exposure and position (tripod or very still hand-holding) and shoot a) a blank shot of your scene, and b) the model in the same scene. The harder method is to shoot your blank scene and your model in different locations and composite them together in Photoshop using masking and selection tools but it’s a much more advanced technique that I’ll cover in future.

How to edit a ghost photograph

Import your two photos into Photoshop as layers, ensuring the blank layer is your bottom layer and the subject is above it. If your photos aren’t fully lining up (check by turning the eyeball of the top layer on and off), choose Edit -> Auto-Align Layers. Now it’s super easy. You can either choose the subject layer and drop the opacity of the layer by using the opacity option in your layers palette to send your model into the realm of the otherworldly OR you can highlight the subject layer and add a layer mask by pressing the layer mask icon, then activate the brush tool with ‘b’, lower the opacity and hardness of the brush in your brush options menu and paint over your subject so they become partially transparent. You can also try playing around with your blending modes (the drop down menu in your layers palette that is usually set to ‘normal’ to see if you can get a pleasing result. You may like to use a mixture of all of these methods so some parts of your subject are more or less transparent than others.

Use a blending mode: difference

To make your ghost even more ghoulish, there’s a variety of other tricks you can try.

To create some mist, make a new layer and using Edit->Fill, choose white or a light colour and then either using a blending mode or a black filled layer mask with a low opacity soft white brush, paint on your photo where you want the mist to be visible.

To add some motion to your subject, duplicate their layer (Ctrl/Cmd J) go to Filter->Blur->Motion Blur. Play around with your angle and distance (amount). If this blurs your ghost’s features too much, add a layer mask to your blurred ghost’s layer to remove some of the effect and paint their features back in.

With a Hue/Saturation layer clipped to your ghost layer (alt click between the adjustment layer and your subject layer), reduce some of the colour saturation in your ghost and with a Brightness/Contrast layer boost the brightness and reduce the contrast to create more of an “apparition”. You may like to use a layer mask to remove these effects from the subject’s surroundings.

Using any of your colour adjustment layers add a green or bluish tinge to the image because, for some reason, these are the colours people associate with ghosts.

Set your final image as the wallpaper on the computers of everyone you know and watch them freak out the next time they go to use it.

How I created this week’s images

‘Come Away With Me’, featuring model Stephanie Perez, was shot in Barwon Park Mansion’s servants quarters while she stood on a chair so I could later make it look like she was levitating. To add to the effect I took extra shots of her flicking her hair, shots of her coat flying and took underexposed shots of the room to bring some detail back into the window area. I then composited all these shots together in Photoshop and cloned out the wall mirror. What should have been an easy edit was complicated by the fact that I only half-heartedly label my layers so I was continually losing and searching for problem layers. Lesson learnt.

I erased the chair

I fixed her dress

I replaced her back arm

I added a dress flick

I then applied colour toning and textures. I also tried to sneak a rabbit into the shot but unfortunately it was too distracting.

‘Of a Different Mind’ represents the different ways we can react to a situation. One girl looks fearful as she runs up the stairs while the other looks almost provocative and inviting, two different ways to react to an unseen person. It was shot in Barwon’s stables with Peta Robinson modelling. The shot came about mainly as a happy accident. I took a few different photos of Peta as she moved slightly in each one. When I brought them all into Photoshop to decide which pose I liked best I noticed that some of the shots looked really interesting combined. Basically I layered one photo over another and masked in only the face from the second photo at a low opacity with some motion blur applied.

Of a Different Mind

I’m so thrilled to have had the opportunity to attend Brooke’s workshop and work with such a beautiful location, great models and talented photographers, but I feel even more fortunate that I didn’t actually see any ghosts (although I did spot a live rabbit).