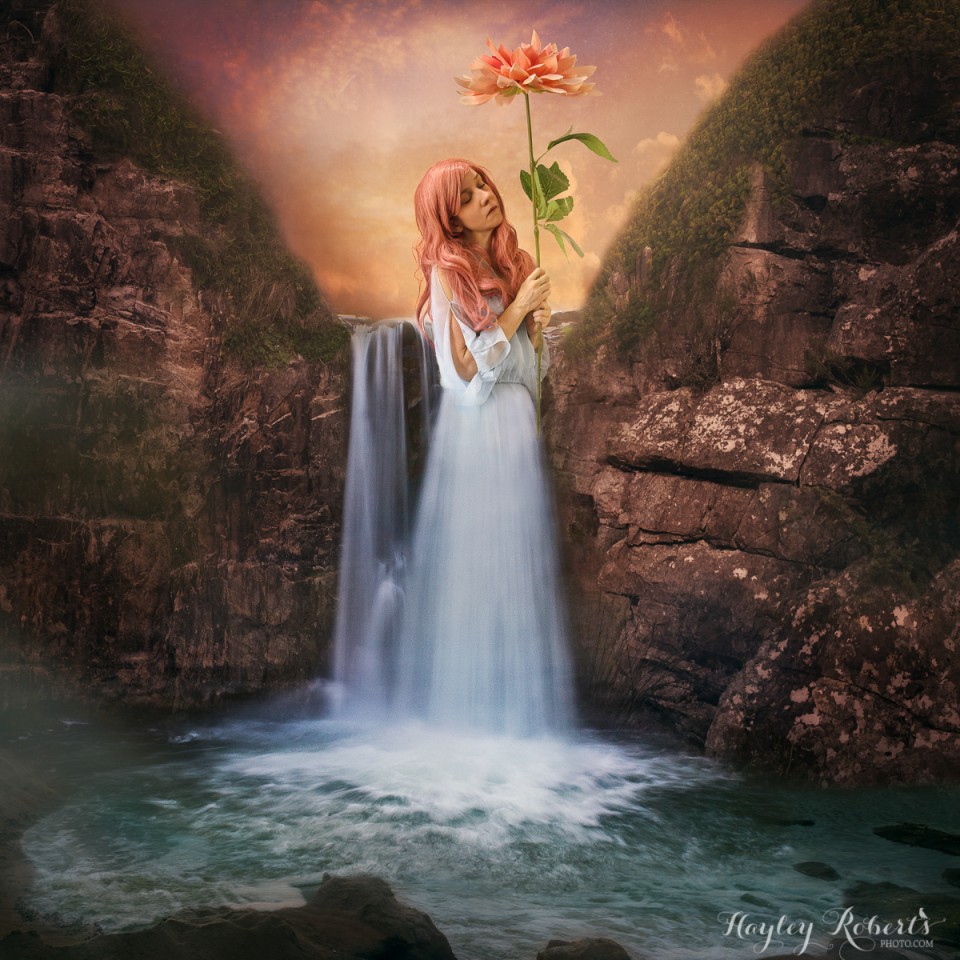 The making of ‘Wonder Falls’

My next tutorial was going to be about making glass transparent so after some thought I came up with a concept that involved a girl in a vase gasping for air. I shot the base photo and the vase in my living room and set about compositing them together.

But somewhere along the line I decided I didn’t really like the pose so I swapped it for another pose I’d photographed.

Then I couldn’t think of a suitable background that helped further her story so I experimented with various stock images but nothing was working and I started feeling disheartened.

But I kept at it, deciding that I really liked the flow of her skirt and actually, she looks much better out of the vase than in.

I began experimenting with stock images of water to make it look like her skirt was merging into the ocean (I usually work with stock images first because they live on my laptop whereas my own photos are kept on an external hard drive that I’m too lazy to plug in most of the time). When I found this stock image of a waterfall I knew right away that I’d found the direction this image would take.

But I always feel guilty using stock because it’s not an image I’ve photographed myself, however I only have a few images of waterfalls and none at the right density to become her skirt. So to compensate, I kept the waterfall part of the stock and then created rocky cliffs using my own images. In fact this is the first time that I’ve entirely built a scene out of composited bits of other scenes and it wasn’t nearly as hard as I thought it’d be. Unfortunately my creative process usually resembles this haphazard approach and is why, when someone asks me what my photos are about, I don’t tend to know because they like to take a journey all of their own with a destination that barely resembles my original concept.

The mountain and moss on the left were created from a photo of this crazy girl jumping off a cliff in Yamba and a moss covered tree stump photographed at Binna Burra.

The mountain and moss on the right were also from photos taken at Binna Burra.

The foreground scene is from a sunrise beach photo I took in Noosa. There was scum around the edges of the pool so I used various photos of lapping water to make this look more appealing. I also used a photo of the ocean to create the pool at the top of the waterfall.

The sky is a sunrise image I photographed at Arthur’s Seat in Edinburgh, Scotland after a gruelling uphill hike. Then I added some blurry foliage to the image, also shot at Binna Burra.

The end result is nothing like I intended but it’s probably my favourite image to date and, for the first time, I’m going to make a print of it just for myself. And, in case you were wondering, yes – the name is inspired by one of my favourite TV shows, Wonderfalls.